I've been absent from blogging for most of the past week. I've had a rather nasty, hanging on sinus infection, and sore throat. Then Thursday I had some dental work done, and when it comes to the dentist, I am a complete and total coward. So I had it all done at once, with sleep sedation, which made the experience not near as bad, but it wiped out that day. Friday was spent at work. Yesterday and today have been spent laying out the fabrics, marking and cutting, for the diapers. First, I took the pattern, from a company called Poo Pockets which has to be one of the cutest names for a diaper, and transferred it onto some bristol board so that I would have a template to trace around with a washable crayola marker. 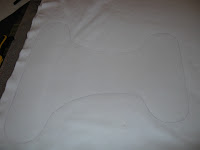 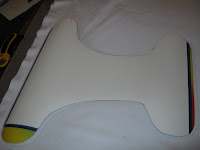 Then, I traced around all the template shapes I needed for the diaper outside, inside and gussets, which are supposed to keep all the "messes" inside the diaper onto the various fabrics. 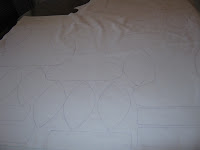 And that process ended up with this collection of fabrics. On the right hand side of the picture are the 3 colours for the outside of the diapers, yellow, chocolate brown, and baby blue, made out of french terry cotton. In the centre of the picture is the hemp terry fabric that gets folded and sewn into the middle of the diaper to act as the absorbent layer. On the left of the picture is the microfleece fabric that will go on the inside of the diaper, up against his skin, and the gussets, also made out of the microfleece fabric. There are going to be a dozen diapers out of each colour. Not a bad 2 days worth of work. Now, to start sewing them. I think I'll take pics as I go, to give an idea of how they go together from this point. 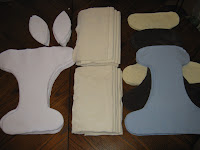