The day after the Friday sew in 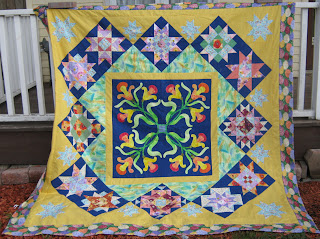 This is a quilt that I've been working on for the past year, as a  BOM  sponsored by Shannon at Pieceful Kwilter It is a lovely quilt design and I'm really happy with the way it turned out, and it is finally added to my finished list, and added to the growing piles of my own quilt tops that are waiting to be quilted. I seem to be doing more piecing that quilting these days.
Thank you, Shannon, for all your hard work in designing this, and in writing and posting all the instructions. I'm really happy with the way this quilt turned out, although I do wish the stars in the gold fabric had stood out a bit more. But, I wanted to use the aqua fabric there as a tie together, because I used that fabric somewhere in each of the sampler blocks.
Then I was able to get some work done on my Nine Patch Pineapple, which meant that there was a lot of sewing going on here yesterday. I was able to start at around 2 in the afternoon, and kept on going, with a few breaks, until about 11:30, when my eyes got to the point where they would no longer focus. I noticed, though, after most of it was together, that one of the pinwheel sections is turned the wrong way. Drat! However, the good news is that I have one of those units left over, for some reason, so I might be able to applique it on top of the offending piece, with no one the wiser. (giggle) I started the day with 23 out of 30 blocks for this quilt done. I finished up the last 7 blocks, got them all arranged on the wall, and then got them all sewn together. There was still time after that to get the first pieced border sections cut, and they are in the process of being sewn. I am doing this quilt along with 2 other people in a sew along with Teaquilts . There is a picture there of Tea's finished quilt. She did hers in reds, and it is stunning. The quilt pattern is from a book called "Geometric Gems", and there are several other quilts in the book that I'm itching to do. But now, as usual, I am working the weekend, so won't have much time to scroll through the Friday sew in posts I'm going to go grab some lunch, and then go work on some of the border units before going in to work at 3, even though I would much rather stay at home and play with my fabrics. (sigh)