Last Sunday, Scott and I decided that we would go on a road trip. I grew up in Windsor, Ontario, and one of my favourite things to do was to walk down to the Detroit River, and watch the ships. It was always interesting to wonder where they were from, and where they were going. I loved to lay in bed at night and be able to hear their horns, (is that the right name for them?) as the ships passed each other. We only lived about a mile from the river. I've always been fascinated by the idea of the Welland canal, and have always wanted to go see it, so, in spite of the fact that it was raining, Sunday was the day. It is impossible to covey the scale or show the size of this ship in the pictures, but, it was huge. It was amazing to watch this huge ship gradually drop 48 feet, before it was low enough to go out the doors at the other end of the lock. The pictures don't convey this, though. I really wanted to be able to follow this ship as it went through all the locks, and finally sail out into Lake Ontario. But, it was already 7 pm when it was in this lock, and there were 6 more to go, so it would have been too dark to see anything by then. But, all in all, it was cool to be able to see it in this one Just looking at the building beside the ship, and comparing it to where the ship is, is a good indication of the size of the ship, and how much it has lowered.  There is actually a small inn, or bed and breakfast on the other side of the road from this lock. Maybe, someday, we can go and stay there and actually follow a ship from one end to the other. 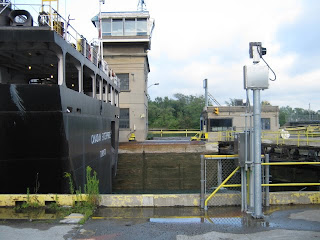 In the lock, and just starting to lower
About midway down now 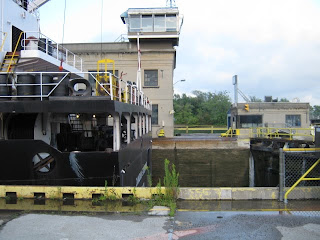 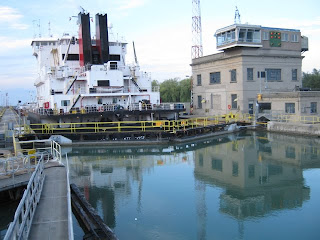 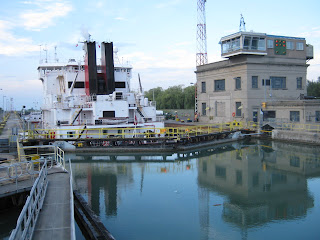 The ship, at it's lowest, just before it was to exit the lock doors at the other end 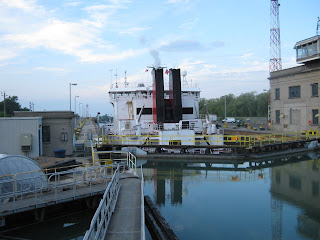