I started a new sweater this past week. It’s a design by Cheryl Crow called Loeanneth. It initially caught my eye because of the colour work in it. But when it turned out o be named after a house in one of my  favourite books called The Lake House by Kate Morton, that decided it. I had to make it. I am halfway done the yoke colour work. 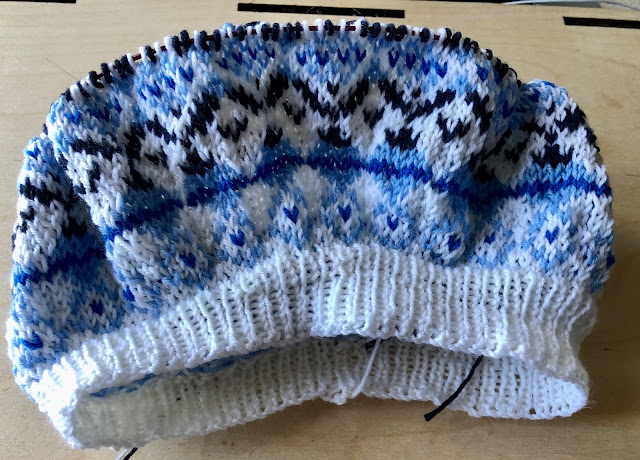 I would have been even further than this except for the fact that I used the wrong colour. where the navy blue currently is. So I had to slowly reverse knit about 6 or seven rows back to where the navy blue starts. Maddening, but necessary and makes the slow stitching aspect go even slower when going backwards. I contemplated leaving in the mistake, which was using the royal blue where the navy is, but decided that I wouldn’t be happy with it that way, hence the slowly going backwards.

I am feeling the effects of the  time change today. I love having the extra hour of day light in the evening, but the change does nasty things to me and it usually takes a few days to get used to it. So today is going to be spent very low key, working on some more knitting and maybe spending some time at the sewing machine working on a new project that I started yesterday,  I’ll show more about that tomorrow. In the meantime, I’m linking up with Kathy’s Slow Sunday Stitching