It’s been quite a while since I did a knitting post. I was off knitting for a while, mostly because i was spending my evenings up in the quilt studio, rather than downstairs in front of the TV knitting. I did get my one sweater finished. 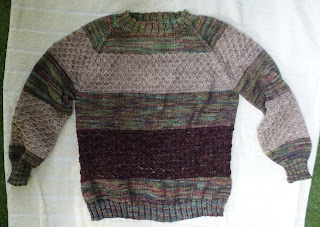 It’s called Roads End, a design by Kay Hopkins. After that one, I decided that I really do have enough sweaters for myself, so I decided to start one up for our grand daughter Abbie. I’ve had this one, the Owlet, 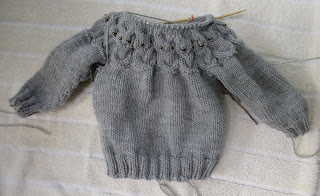 saved on my Ravelry favourites for years, ever since I started using Ravelry, since it’s on the first page of my favourites. The only thing that really had me intimidated by this sweater was all the buttons that had to be sewn on for the eyes. Well, that was solved by finding some beads that could be inserted over the knit stitches during the knitting process. No buttons now necessary. If you biggie size the picture by clicking on it, you’ll be able to see the beads. This one should be finished in the next week or so. After this, I think I’m going to start a winter hat for little Abbie, using this pattern for the hat. I have beads left from the package for the eyes, so I’ll put some beads on he hat, too. I love the booties in that pattern, but Abbie is way beyond the age for booties now. 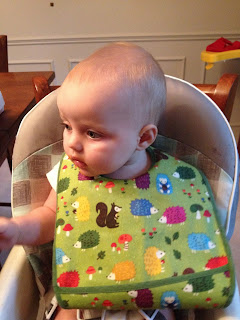 Those will look so cute on this precious little girl. I’m linking this up, a day late, to Judy’s On the Needles.