I’ve finished quilting Northern Tree Line, but it is still waiting for its binding. 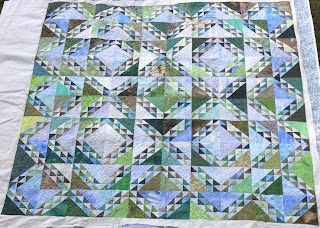 It’s waiting on trimming, as well, as I ponder how much extra to leave around the edge in order to be able to get binding on without cutting off all the triangle points. I used a very simple quilting design called Ferns, 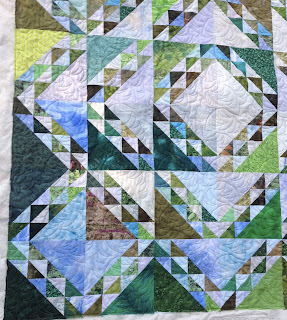 designed by Barbara Becker.
Today I loaded on a very old quilt. It’s called Grandmother’s Diamond Ring. According to records here on the blog, the piecing was finished in July of 2012. I have no record of when I started it.  I suspect it pre-dates the blog. Which means it is older than 2010, which is when I started blogging. It’s been hanging around because I wanted something special in the white background hexagons. I finally found that something special earlier this year in the form of these roses. 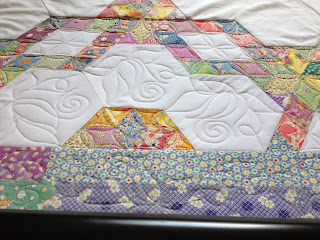 It’s a Rose hexagon designed by Judy Allen and Jessica Schick. I have a stencil for the border using the same rose that I bought years ago. Maybe that’s why the roses in the hexagons caught my eye. 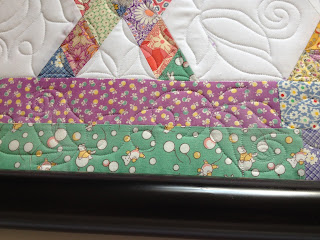 It’s kinda hard to see the design in the border, but the picture can be biggie sized if you click on it.
This one is going to take a while. The borders have to be marked with chalk and the hexagons each have to be marked with disappearing marker. I worked on it most of the afternoon, but a large part of that was spent figuring out how to do the borders. There isn’t a corner turn on the stencil, so that took a bit of thought and finessing. This will likely be on the machine for the rest of the week.
I’m continuing to work on the binding for La Passacaglia. I’m hoping to have it done for a Friday finish celebration.
I’m linking up to Lorna’s Let’s Bee Social. Then it’s time for some supper and maybe trimming Northern Tree Line and making its binding. Who knows, there might be two finishes for Friday.....