The stash part is easy...... nothing in and nothing out, But considering the year is only 3 days old, that isn’t all that great an accomplishment in either direction. As in other years, in stash tracking, I’m doing it for curiosity sake, rather than an attempt to use a certain amount or an attempt to restrict any stash enhancing.

I’ve spent the whole day slow stitching. I really wanted to get the white around the left upper corner, which I’ve now done. In addition, as a great bonus, I’ve also gotten the top left section stitched to the bottom. 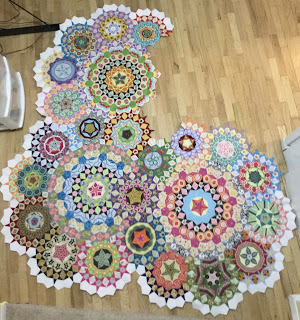 So, now all that is left is the top right hand section, which is already mostly done. It needs the white added on, and a few more rosettes sewn onto it. It’s gotten so much closer to being done after all the hours spent on it today. The last stitches were put into this section during the final minutes of the first episode of Downton Abbey. I’m going to link this up to Kathy’s Slow Sunday Stitching and Angie’s WIPs be Gone. After that, considering it’s almost 10:30 at night, I think that just might be it for the day.