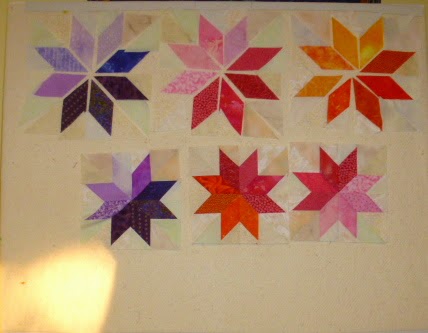 I'm late, again, posting this. Maybe I should name mine design wall Tuesday. Except, that if I did that, it would probably end up getting written on Wednesday. Oh well, better late than not at all. I don't have anything up on my big design wall, at the moment. I continue to slug away at this particular UFO, called Meteor Shower, by Judy Martin. The center is done. The big stars for the four outer corners are done. I am now working on one set of side borders at a time. Three out of six stars for the first of the four borders are done. I hope to get the last three sewn up tonight. Then I can get that first border assembled and sewn onto the quilt. I would like to have this one done long before the end of this month. We'll see how it goes. I have to be careful when it comes to attaching the borders, because the way the stars are turned and the side each border attaches to depends on the colours in the stars. Somebody remind me that, when I start the next new quilt, I should make it an easy one. My brain is just about fried after the last three quilts I've finished. Each of them have been large and complex. Maybe the next should be an easy string quilt, or something like that.
Anyway, I'm going to like up to Judy's Design wall Monday, even if it is Tuesday, then I'll go back to sewing stars and listening to the soothing music of Fernando Ortega.
Posted by Cathy at 20:24