Well, here I am, once again, behind on blogging. There has been a lot going on this past week, but I haven't seemed to be able to make the time to write about it. So, I'm going to take a few minutes here and get caught up.

I am really excited about this first quilt. 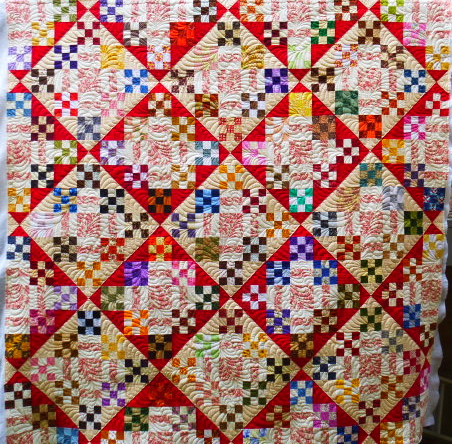 It is my own design, called NINE IN THE POND. This quilt here was done from  that pattern by  Charlene. This is actually a quilt that I designed several years ago, while I was a member of an online swapping group. We’d swapped nine patches, and I needed a design to use them in. This was the result. And, if you look over to the right hand side bar, there is a pattern available for purchase, in either print or PDF version. This is so exciting!!
Charlene wanted an all over design that would highlight the contrast between the light and dark sections of the design. When she dropped it off, we discussed feathers, maybe a wreath or something, in each of the areas. However, after looking at it for a while, I came up with an idea that would be continuous across the quilt, that was not only more economical for Charlene, but much easier to do, without a lot of ends to tie and bury. 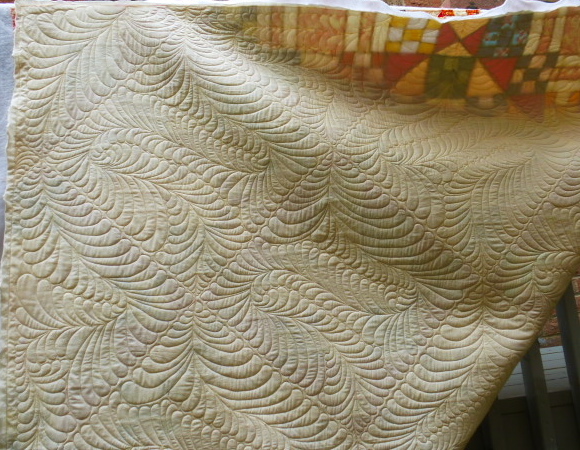 It's much  easier to see in this photo to the left of the backing. 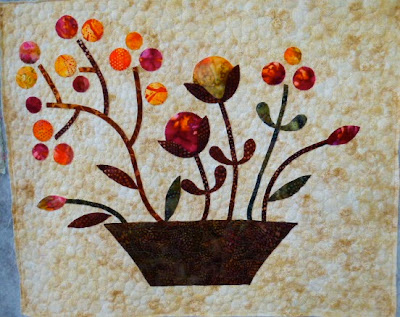 Then I did up this wall hanging for her, which is a design from Edyta Sitar. I've never done pebbles as a background fill before, but all the circles in the applique were quite vocal about wanting circles in the background to keep them company, and who am I to argue.

And this one is the result of a workshop she did with Kaffe Fasset a year or so ago. It was so much fun to see her bring this one in because it is so not her style or colours. She wanted to take the workshop so that she could stretch herself, and do something outside of her box. I think she was very successful in her goal. 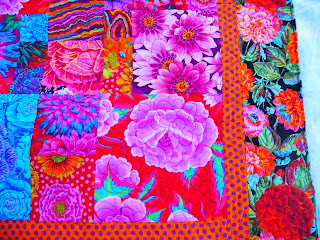 I quilted a very large scale overall flower to complement the scale of the fabrics. 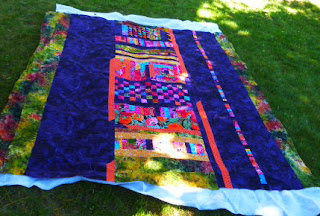 Because this quilt, and the fabrics are so outside of what she normally uses, she wanted to use them all up in the same project, so the picture to the left here shows how she pieced her backing. Very modern art looking, I think.
Thanks, Charlene. These were fun to work on.