There is nothing on my wall this week. There has been no sewing this past week. There has been tons of cleaning and painting and organizing and dry-walling and ceiling repairs. And most of that has been done by Scott and our wonderful son-in-law, Matt. The last of the big jobs is almost done. There was some damage in the ceiling of the basement that had to be repaired. The new dry wall is up, and the taping and "mudding" of it is under way.
My primary job today was to go over to the apartment and be there when the gas fireplace people came over to give a demonstration of how it works. While I was there, I decided to start unpacking the box of fabrics that I had purchased way back at the beginning of the year. I had found some new fabrics with stripes printed on the diagonal to use for bindings. I've got them rolled on to their mini bolts and ready to live on their shelves. 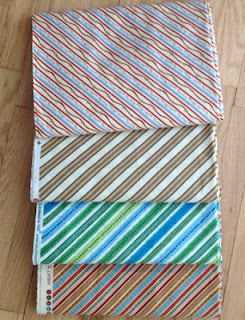 They'll eventually look something like this, although I'm sure there will be some rearranging going on. 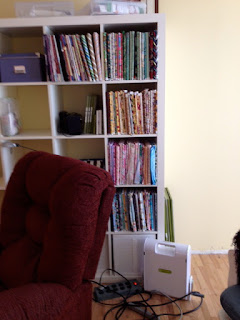 That area to the right of the shelf is where my cutting table is eventually going to live.
And I also found in that box, some really pretty
f 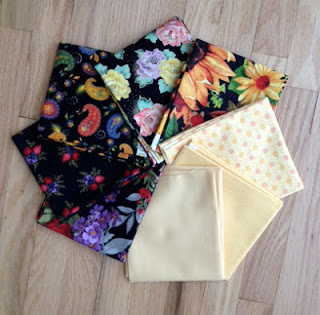 at quarters. I wish I could remember if I had any specific plans for these when I ordered them.
LOL!! I guess I'll just have to come up with a new idea.

And here is a picture of the fireplace, turned on and cranking out heat, to turn a chilly basement into a lovely warm and inviting space. 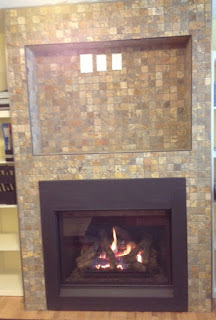 It's beginning to feel like home.
I'm linking up to Judy's Design wall Monday at Patchwork Times