Battle of the Stars

I was quite happily working on my Battle of the Stars quilt last week. I have almost all of the centre of it done. Just a few more of the outer background shapes to sew in up there on the top left. 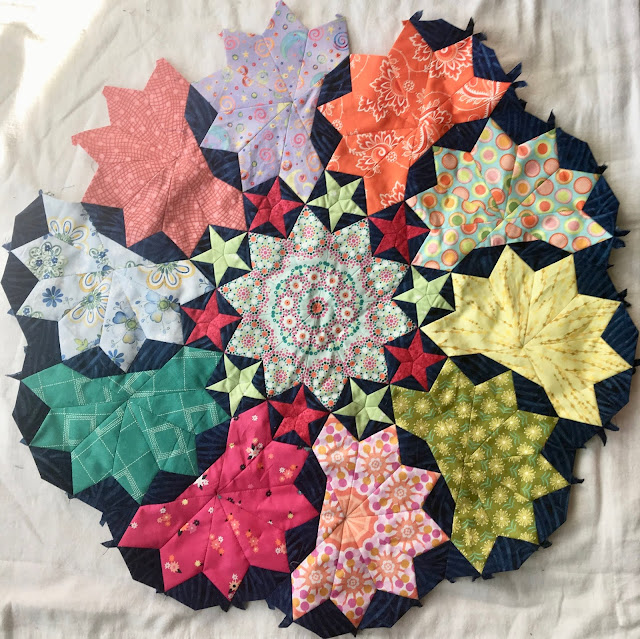 So, since I was curious to see how the full 10 point stars that circle the centre looked, I made one and in the process created some more swiss cheese fabric. 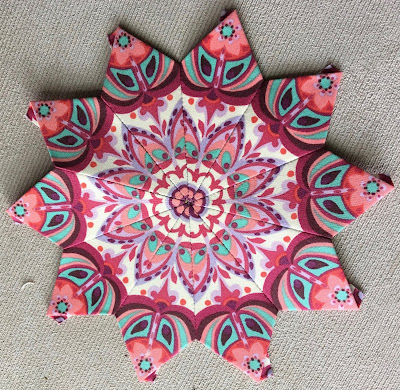 This was on Wednesday and Thursday. Friday came along and I wanted to check the pattern, which is in Willyne Hammerstein’s Millefiori 3, for some layout details and I could not find the book. I had been using it on Thursday and overnight it vanished. Poof, gone, nowhere to be found. We have a saying in our house to the effect of  “when searching for something when all else fails look under something.” Unfortunately in my area of the room where I do my sewing there is no end of things to look under. But I had just had it Thursday so there was no way it could be at the bottom of any of the piles, but even so I looked under them and through them trying to find this book. Well to make a long story short, I did eventually find it in and in a place I had looked numerous times.... under my chair. In my defence it was under the chair in such a way that it could not be seen from the front or from the side when looking under said chair. It was curled up on itself so I found it only by feeling for what was under there rather than looking.
All of that to say that I can now start to figure out how the in between pieces for the 10 point stars will work. They are odd shaped and the instructions aren’t clear so I’ll need to play with them before actually putting scissors to fabric for them let alone starting to glue baste them.
Before I found the book, I took my severe frustration out on doing more stabbing fabric with a needle and got lots more done on my embroidery piece. I’m working my way across the bottom lace bits now. 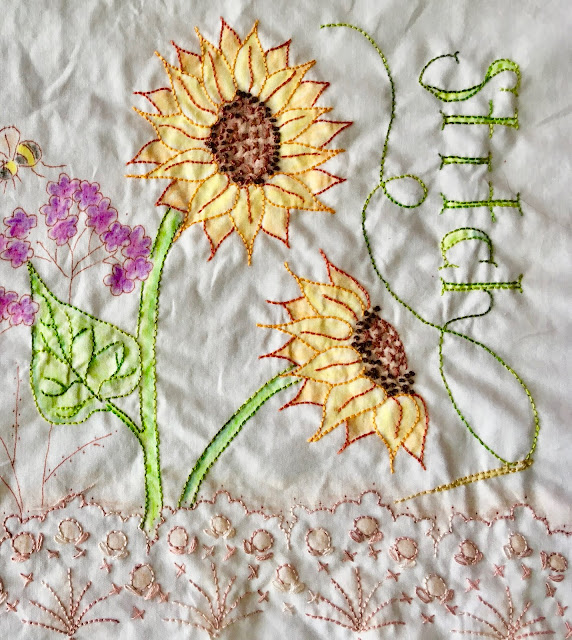 The sunflowers and their leaves are done. There are french knots supposed to go at the top of the lace, that’s what all those little dots are for. I am considering using some fine seed beads instead.
It is a gorgeous day here today, so I'm going to post this and link it up to Kathy’s Slow Sunday Stitching and then head out to play in the garden for a while.....