I’m still working on the compasses quilt and making good progress. The decision about the outer curved geese that I thought I could leave till the end wound up being made much sooner than I thought it would. It started out sooner because of trying to fit making the curved geese and sewing them on a couple at a time when doing up that first half compass. 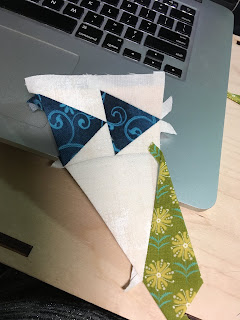 It turned out not to work very well doing it that way because they didn’t line up around the curve as nicely as I wanted. But trying it that way meant that I had to decide on fabric and colour sooner than I thought. I ended up going much darker than I thought I would in the fabric choice and it’s a good thing too. The yellow/gold of the earlier round of curved geese would have gotten lost near the grey of the outer background triangle. 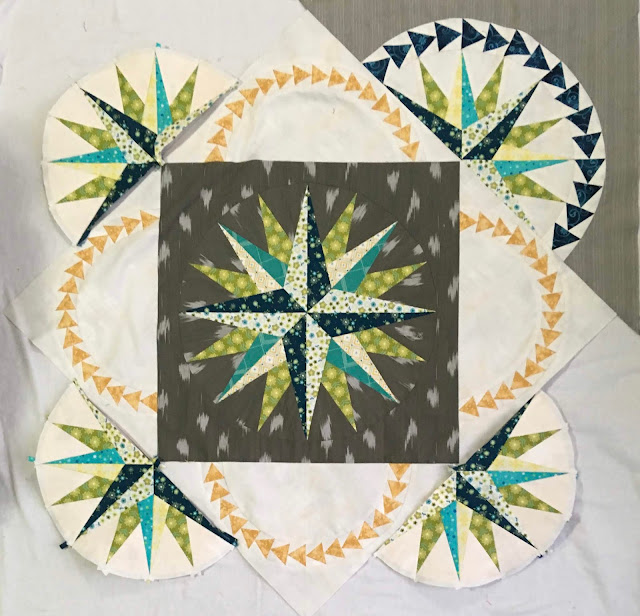 So now all the half compasses are finished and I’m working on the navy curved geese. 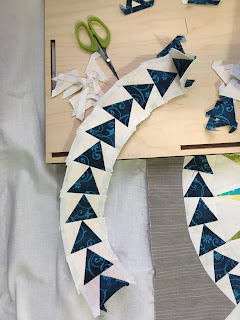 It’s a fiddly process, but enjoyable none the less. Once the 16 curved geese are pieced together I will turn under the inner edge of the geese and appliqué them down to the half compass. Then I reverse appliqué the finished half compass unit to the grey triangle. All of this amounts to a lot of very slow stitching by hand. I’m linking to Kathy’s Slow Sunday Stitching.
And since it’s unlikely that I will be posting anything before Christmas day arrives, I want to wish all who read hear a very merry Christmas!