I’m in the process of chasing a squirrel. It’s a project that’s been in the back of my head for a while, and a couple of days ago it demanded to be let loose. At first it started as a mostly grey squirrel, but once it was partially assembled, I decided I didn’t like how dark it was turning out. 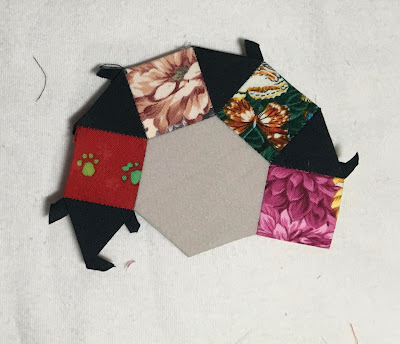 Since there are potentially going to be a lot of these units, I don’t want the over all quilt to be that dark. So then it turned into a brown/beige squirrel and I think I like it much better.  Other than the very weird face in the hexagon. It’s supposed to be a rag doll, but it doesn’t quite come across like one. 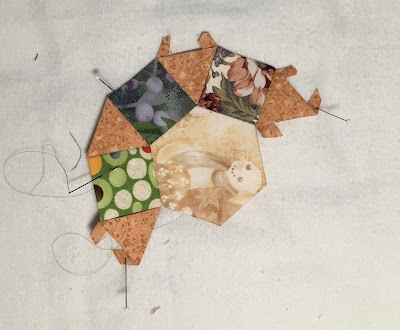 But they both have their down sides. If I use the greys, I’ll be limited in how many dark colours I can use, but there will be many more places to use lights and I could also use lots of brights. If I use the beige, I’ll be limited to mostly mediums and darks, but few lights. There’s a picture of where I am heading with this quilt here on the Quilter’s Cache. It’s a variation of the Jack’s Chain block. I’m going smaller with it and replacing the nine patches with a smaller square. But the layout will be the same.
So I’m looking for opinions here..... what would you do.... grey squirrel or beige?