After finishing Castor and Pollux I had a bunch of kite shapes left over. So, what's a quilter to do but start something else with them. I’m doing sets of fours with them this time, two lights and two darks, and they’ll be part of another new pattern. 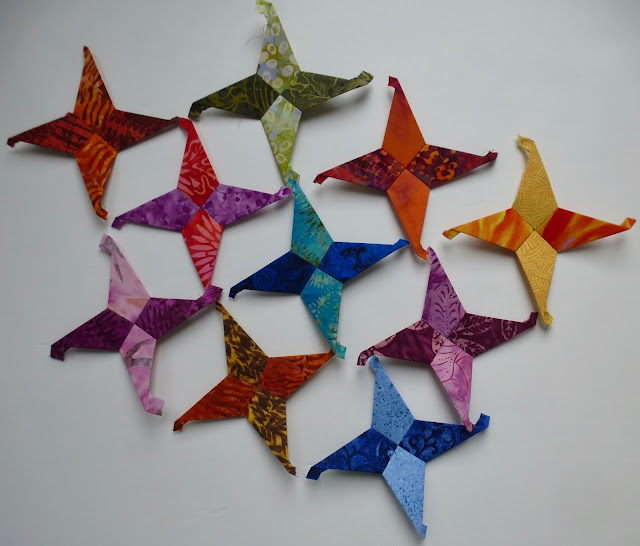 However, There is going to come a point when I’ll have to stop sewing in order to actually write up the patterns. But for the moment, I’m having fun. There seems to be an over abundance of orange in this mix, so it just might be time to drag out my bins of scrap strips and get a greater variety of colours going. I might throw some prints into the mix, too in order to break up the preponderance of batiks and tone on tones. The background is going to be a Kona solid, probably the pepper colour, which is as close to black as it can get without actually being black, if that makes sense. I’m hoping it will be easier on the eyes to sew than black. The idea is for it to look like stars in the night sky. I seem to be on a roll when it comes to these kites, and blocks that look like stars. I just might start a series of quilts named after constellations. This one is going to be named Orion’s Belt.
I’m going to link up to Lorna’s Let’s Bee Social. Then it will be time to get some lunch and head up to the quilting studio to get some more work done. I’m having a three way race up there to see what will happen first.... the quilt gets finished..... I run out of the bobbin colour I’m using..... the new thread order with more of the bobbin thread arrives. Stay tuned for the results of this exciting race. (grin)

Edit: running out of bobbin thread won. Now, I wait for the delivery of more thread. And maybe, make some more stars.