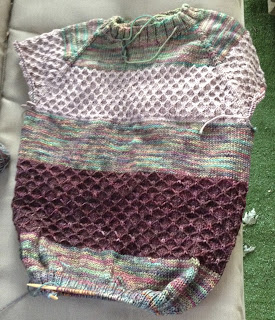 More progress on the Roads End sweater. There is about an inch left of the bottom ribbing and then it will be cast off time for the body of the sweater. Then it’s just the sleeves, which should go fast. Another week or two might see this one done. 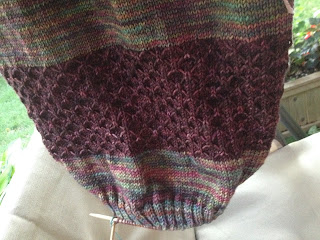 This has been such an enjoyable and fast knit. I have other yarns that also are not in quantities enough for a whole sweater, but might work for this. However, I’m not convinced I need another one in the same pattern, or really want to do one in the same pattern. I bought some stuff several years ago for a Hay Cove that I’m kinda itching to do. But then there is also some stuff for Abbie for this fall and winter that I’d like to do, so I’m not quite sure yet what is going to be next. In the meantime, I’ll continue on this, and link up to Judy’s On the needles.