Another two weeks have gone by, and I have a little bit of progress to show on the hand stitching project. It’s been a gorgeous day here, and I’ve spent most of it sitting on my swing, happily stitching away. I’m working on the last of the hexagons to go into the centre section of this piece, and then I can decide on what to do about going further. 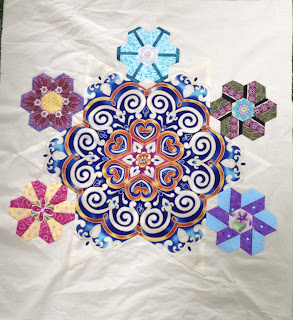 I want a narrow border of some sort, and then a wider cream border for more of the pieced hexagons. There is a border stripe print up in my studio that has some butterflies that might be interesting there. Those might get cut this coming week. I’m also considering adding some fussy cut triangles to the points of the large star. It seems to me that there is too much beige blank space there. I’ll have to get them done and lay them out to see, but not at this moment in time.
I had some fabric arrive this week, so my stash added numbers have gone up and have put me into negative numbers, for a bit. I’m going to be doing some backings in the next week or two, for some projects of my own that need quilting, so that will get the numbers back where I want them again.

I’m linking up to Kathy’s Slow Sunday Stitching. It’s her fourth anniversary of the beginning of this link up series. It’s grown quite a bit in those four years, and the hand work on display each year is astounding. I’m also linking up to Judy’s Stash Report. Then it will be time to head indoors. There are thunderstorms headed our way.