So, last Tuesday, my machine arrived back home after its extended hospital stay in Iowa. 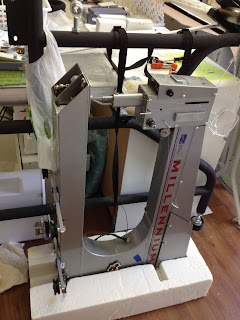 Scott and I spent the remainder of Tuesday and all of Wednesday putting her back together. That was a long and stressful job. The carriage got some new wheels, so that had to be done before the sewing machine head could go back on the carriage. This is a close up of one of the wheels. 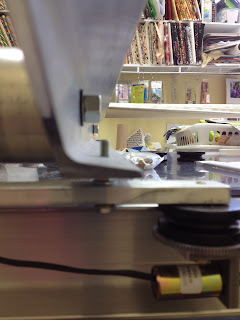 Once that was done, the machine head, which weighs somewhere around 60 pounds, had to be reconstructed, meaning the light and the handles and the wheel axels had to be put back on, and then the whole thing slid onto the carriage. Did I mention it was Scott and I doing this? By the time al the re-assembly was done, it was late Wednesday afternoon. I’d done a test run just to see if she turned on and functioned, which she did, and called it a successful day. Oh, did I mention cleaning of the table of the long arm frame???... I thought not. Thursday, we got to spend the afternoon with Abbie, since Becca had appointments during that afternoon. Grampy indulged in some silliness, 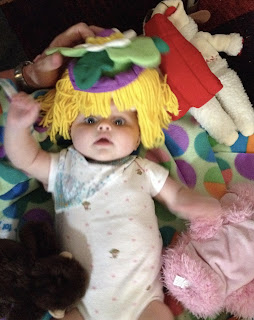 deciding to try and see what Abbie looked like with hair, not very successfully. She has gotten quite mobile, just in the last couple of days, with figuring out how to turn from her front to back and then back to front. She now knows she can get places doing that. The days of being able to put her down and thinking that she’ll stay in one spot are gone. After Becca got home, I went and gave the machine a test run. All I can say is WOW! I have been working with a seriously crippled machine for a very long time! She now runs so smoothly and so quietly. In no time at all I had the baby quilt that was on the frame finished. 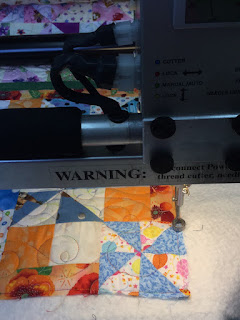 Friday I loaded a customer’s quilt, and other than the small glitch of the machine falling off the rails because I forgot to tighten on of the bolts, she ran beautifully. Tomorrow, I get back into serious work and try to get caught up.