I’m not doing too well with writing on my blog lately. Getting any more than 3 or 4 posts a month seems to be a struggle, on this blog, at least. I’ve been in charge of doing the blog for the London Friendship Quilters’ Guild this year, which means most of my blogging time is spent there. So, I’ll try and do a catch up post, yet again. Last weekend we went camping for Avery’s 5th birthday party weekend. His daddy Noel went and picked him up on Saturday, and Avery stayed with us until his birthday on Tuesday. What a great time we had, in spite of everything the weather did to try and defeat us. It was cold....... really cold. For the first time ever, it snowed while we were out camping. Look at those clouds..... 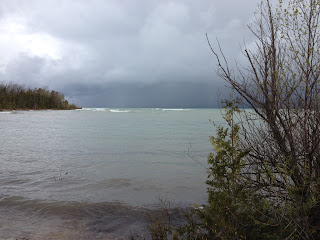 This was taken on Sunday. Shortly after I took that picture it started to pour down ice pellets. Notice too, the lack of leaves on the trees even though it's the middle of May. Scott and Avery had a great time together. Scott is such a wonderful Grampy. He totally enters into everything they do together. It is so much fun to watch. They are playing with flying tops here, 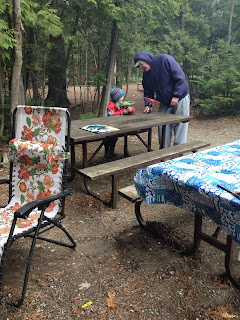 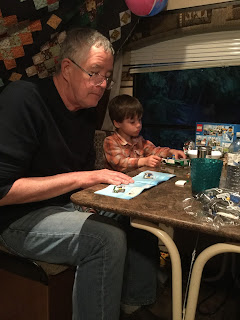 Noel was with us for most of the weekend, but he had to go back into work for Monday. He came back up Monday evening, so it was just Scott and I and Avery on Monday during the day. Even though it was still quite chilly out, we decided to go into Port Elgin for the afternoon. Here are Scott and Avery drawing the sun and the planets of the solar system into the sand. Avery knows the names of all the planets, and the order they come in. Scott started off doing the drawing, 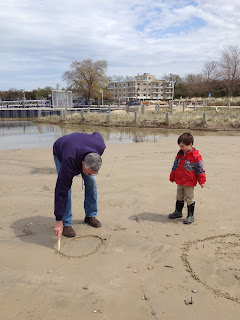 with Avery telling him what went where. And then Avery took over the drawing process. 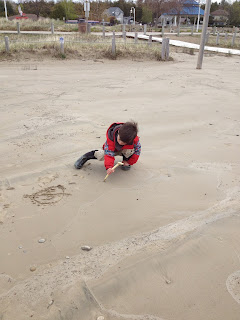 We got home late afternoon on Tuesday and spent that evening and the next day unpacking and trying to re-organize the trailer and the stuff that’s stored in it. Matt and Becca have taken it out for this long weekend, The weather is predicted to be much better. Almost perfect, in fact. It’s their first camping trip out as a family of three. 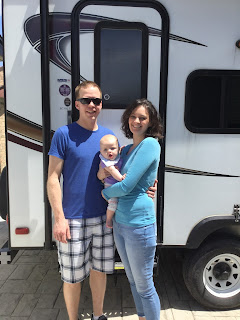 I’ve been spending the last couple of days trying to put order into the chaos of my sewing studio. There wasn’t a flat surface anywhere that didn’t have something spread all over it. My long arm is due back on Tuesday, after being in the long arm hospital in Iowa for three weeks. I am so hoping that everything will flash up and work beautifully once everything is put back together here. However, none of that putting back together could happen with the table looking like this. 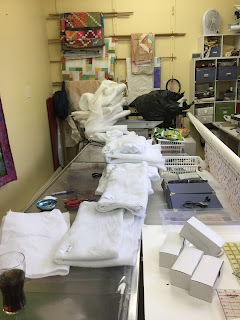 I have stacks and stacks of leftover pieces of batting that have been trimmed from quilts over the years. Today was the day to do something about it. So I sorted them out according to type of batting and size of batting 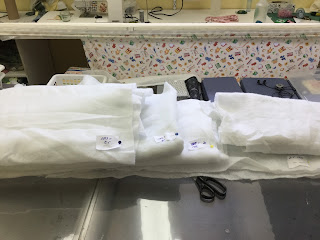 and then started using the fusible tape to piece them together. After doing that I now have four pieced batts measuring around 90x100. There is nothing else that I need do this weekend, so I think I am going to enjoy the glorious weather and do some sewing on my projects. I’m hoping to get at least one of them finished before Tuesday. After that, it will be a solid day or two getting the long arm put back together onto the frame. I’m looking forward to having it back and up and running again. It’s been out of commission for 6 weeks now. Somehow it feels longer than that. I am so far behind where I had planned to be with all the customer quilts I have, not to mention my own. I will be working hard to get them done. Anyone reading this who have quilts waiting here, I deeply apologize.