My poor long arm continues to be in need of repair. This is how she currently looks. 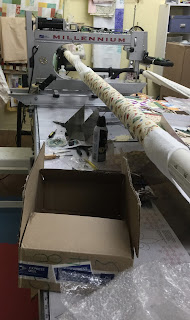 The tech people at
APQS are fabulous. Amy has spent many hours in the past couple of days, via FaceTime on our phones, trying to track down the problem. So far no success. She’s sending me out a new part that might be the culprit, which will be here, according to the UPS people, on Friday. If that doesn’t work, the machine will be going for a trip to its birthplace in Iowa for further diagnostics and repair. I wish I had Geordie LaForge here to do a level four diagnostic and repair. Ah well...... In between playing with all the frighteningly small pieces in that machine, I’ve been getting some of my own projects finished.Northern Tree Line now has its blocks turned the correct way and sewn back in place. It also has a backing made and a label on said backing. I’ve pulled out a UFO, which was started way back in November of 2014. It’s a Sister’s Choice variation. I put it up on the wall to study and to figure out exactly where it was and what needed to be done. 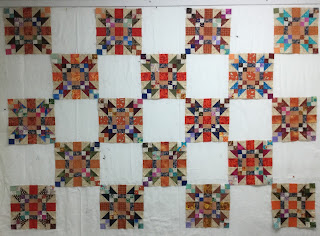 
This is the main block. 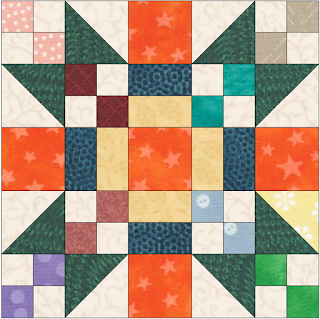 It’s using up the four patches that were left over from my Rainbow Scrap Challenge  quilt. The triangles in each block are the same fabric, but those fabrics change from block to block, in an attempt to use up 2 1/2 inch scraps.
This will be the alternate block. 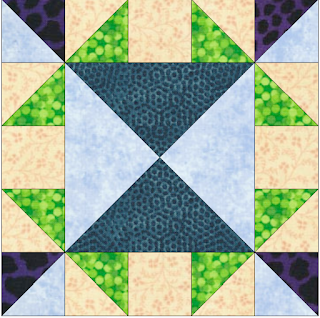 I’m not quite sure yet what colour those green triangles will end up. I really like the contrast the provide in the quilt, but I don’t have enough green like that in my stash, which could be good excuse for some stash enhancement.
And this is the finished layout. 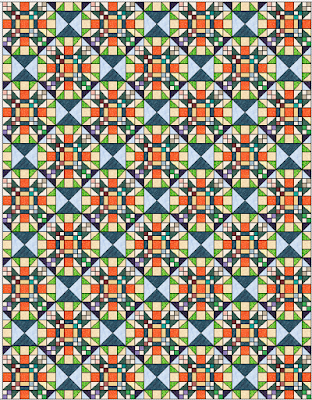 This whole thing was designed in Electric Quilt 7 software. It has yet to tell me whether it wants borders or not. The blocks finish at 10 inches. The quilt, as it is now, will be 70x90.
In addition to all this, all of the white pentagons, excepting the corners are stitched onto the blue borders for La Passacaglia. The corners of the blue borders have been mitred and sewn. All that is left is to sew the white pentagons to the corners of the border fabric and it is done! That will happen over the course of the next couple of Slow Stitching Sundays.
I’m linking up to Lorna’s Let’s Be Social and also to The Needle and Thread Network. After that, I’m going to go play with some Sister’s Choice blocks and do some homework for a workshop I’m taking on Friday.