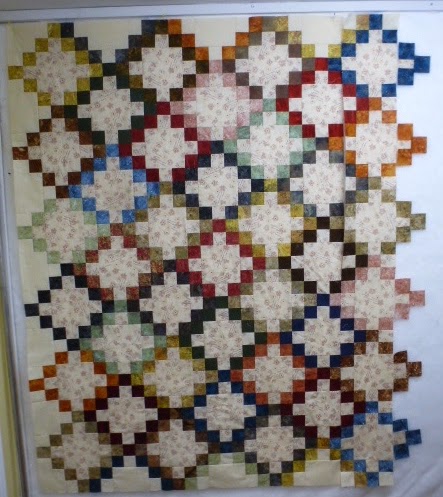 I finally managed to tear myself away from working on La Passacaglia and spend some time working on Texas Chain, a design by Judy Martin. It's been hanging around on my wall since I started it back in January. I was going happily along, and got a singles row, and a nine patch row done. I put them up on the wall so I could begin to place the colours for the next two rows. But something was off... something was very off, and it took me a while to figure it out. In this picture below, that light background square on the right is supposed to be the top of the next set of coloured squares. I made the same mistake all the way down the row. So, I had to do some selective fussy unsewing.....
sigh...........  They are now all ripped out, and I have the next row all laid out. I might have to cut a few more squares to give the last row some variety and contrast. But I decided that it was best not to do any more sewing, lest I make another mistake requiring the frogs to start singing again. I'm linking up to The Needle and Thread Network for its Work in Progress Wednesday, except that I haven't made a lot of progress........ sigh.........