Last month I was brought a quilt that made me very nervous. Gail, Christine and Carol
made a group quilt for Gwen Marsden, who is a very widely known and famous quilter. The three of these ladies have gone to Gwen's quilt retreats for quite a while now, although I'm not sure of the exact number of years. Gwen turned 80 this year, and decided that this would be the last of the retreats that she would host. So, in honour of Gwen, and to thank her for all she has done over the years, these 3 lovely ladies made Gwen a quilt, and brought it to me to quilt. Did I say already that this made me nervous? Not only would it be seen by Gwen, but by all the other ladies there. However, I knew about this while they were putting the finishing touches on the top, and had seen some pictures of it while they were working on it, so I was able to try and come up with ideas for it.
Here's a picture of the whole quilt. It is fun and bright 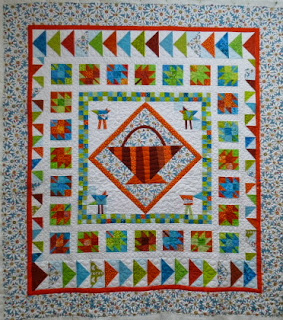 and happy and whimsical. The first thing that came to
me when I looked at the quilt was all the fun daisies in the fabrics. So I decided to take daisies as a theme in the quilting and run with it. 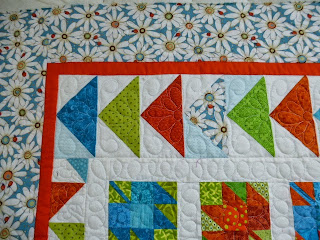 I started out with half daisies in the flying geese, with a kind of vine like tendril coming off the side of the daisy to extend into the white background. There are also daisies quilted into the border, although they are hard to see in this picture.  There are smaller daisies in the half square triangle border, as well. 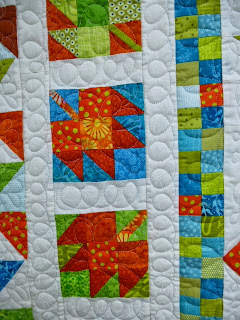 And keeping again with the daisy theme, they show up again in the maple leaves. One of the biggest challenges in doing custom work like this, is coming up with a way for the quilting to be as continuous as possible, with the least amount of starts and stops as can be managed.  In order to do that with the maple leaves, I connected them with the loops in the sashes between the blocks. And once the loops were there in the sashes, it was a natural extension to put loops into the borders.

In the center of the quilt, the birds are stitched in the ditch, as are the orange borders and the basket. There is loopy meandering in the background of the birds as well as the daisy fabric around the basket. I put wavy lines in the basket, going in the opposite direction from the piecing, to give a hint of the idea that the basket was woven. 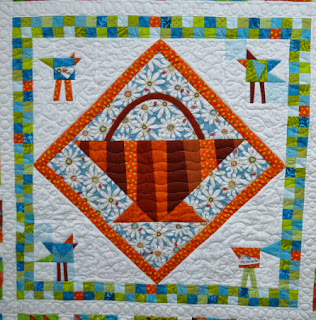 The backing was a lovely soft and cuddly flannel, with leftover flying geese pieced down the middle. The quilting shows up really well on the back. The borders are easy to see on this picture. 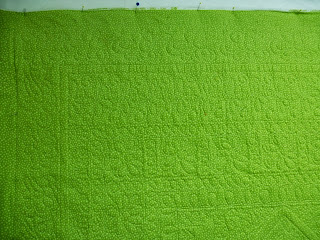 And this next one shows the center quilting. 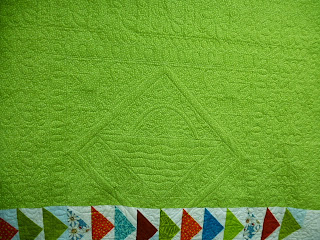 Once I got over my nerves, and sat down and listened to the quilt, followed by quite a lot of graph paper doodling, this quilt come together easily, and was an awful lot of fun to do, as well. Thanks, so much, ladies, for trusting me with this.