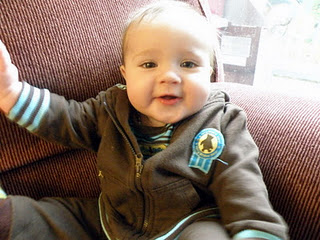 November 27, how on earth did that happen so fast? Wasn't it just yesterday that we were waiting for our grandson to be born, and he's a little over 6 months old already. He's such a handsome little boy. I am so thankful for the technology of the internet. It makes keeping in touch, and being able to see him so much more possible. He had his first taste of banana a couple of weeks ago, and Laurie called me on Skype, and put her laptop in front of Avery while he was having his first taste of it, and I was able to participate in the experience, even from 4 hours away. So cool. But, this is supposed to be a stash report, not an Avery report. Somehow, I seem to have gotten a bit side tracked. So, on to the numbers:

Hmmmmmmm, looks like I just might make the 150 yards used mark. I wonder if I'll actually get down to a zero balance? With only one month left to the year, probably not, but I'll get close. I'm linking up with Judy's stash report where there are other quilters also keeping track of there fabric ins and outs. And now, I'm going to go sew for a while, before I have to go in to work this afternoon.
Posted by Cathy at 11:59