This past week has been crazy busy. We are vending our English Paper Piecing supplies at a quilt show in Chatham next weekend. Now you would think that because we knew this was coming we’d slowly and gradually build up the stock we want to take, or at least that’s what organized people would do. But no, that’s not what we did, so now this past week we’ve been scrambling to get everything cut. And of course, I keep adding to the list of things I want to take. That means there hasn’t been nearly as much time for slow stitching as I would like. Some days I wasn’t sitting down until after 9 pm. But I’ve still managed to get some progress made on Friendship Chain, but not a lot. I’m hoping to do more today since other than going to church, I have no other plans for doing anything else other than slowing right down, letting my hands keep busy while my brain roams freely dreaming of my next project or 6. 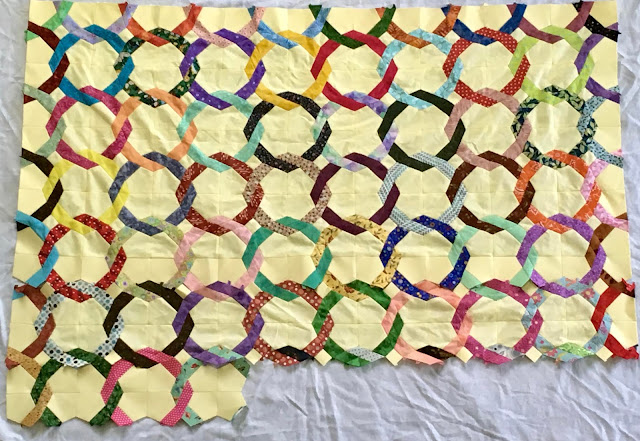 I’m also planning pattern writing for this one while I stitch and I think I have it figured out how to write it up in an organized manner that will make sense. After this row is finished, which is number 6 out of 10,  I’m going to try and pull the fabrics for the rest of the quilt. Then I’ll start the process of taking pictures while I work on it for the pattern. The pictures serve a couple of functions. Obviously they are very helpful in the pattern so that there is a visual representation of what I am trying to explain. But it also serves as a reminder to me of the various steps since there is often a lag time between doing the steps in the quilt and writing it down. But first, row six needs to be finished.
I’m linking to Kathy’s Slow Sunday Stitching