One of my slow projects, Leo’s Mane, is finished, the hand stitching part, at least. I think I’ll be putting a border on it probably out of the same fabric as the half diamonds around the edge. 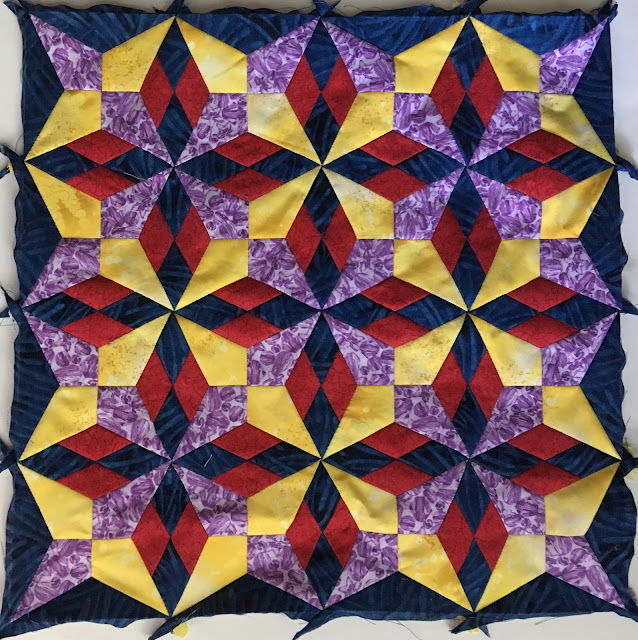 I’ll be doing up a pattern for this project in the next month or two. I’m not exactly sure what I’m going to start next. I’ve just recently discovered the designs by Nancy Cabot, first published back in the 1920’s in the Chicago Tribune. A lot of them are very complex and would be perfect for the English Paper Piecing technique. Castor and Pollux was one of Nancy Cabot’s designs.
In the meantime, while I’m looking around and playing in the Electric Quilt software, I’m continuing to work on the half hexagons. This is a picture of what I have so far. I’m not sure of the layout here, but I have lots of time to play around and decide what I want to do. 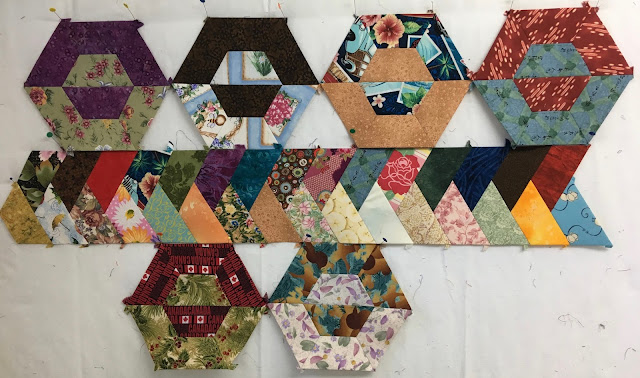 There’s been a lot happening here this past week. I’m going to do a bit of “shameless self promotion” as my good friend Gail calls it. Our website http://eagleswingsquilts.ca launched on Wednesday, and we are now officially in business selling English Paper Piecing supplies, as well as some of my patterns. We are in Canada, so our prices are all in Canadian dollars, and we ship from inside Canada. When I first started this English Paper Piecing journey with La Passacaglia, I purchased from the States and was blown away by the added cost of the exchange on the dollar and by the cost of the shipping from there to Canada. There were actually four of us doing the project at the same time, and we all had the same reaction. We started thinking that someone should really do this in Canada. That was 2 1/2 years ago, and it never occurred to me at the time that the “someone” would be us. However, we don’t only sell to Canada. We can sell to the States, and the differences in our dollars can act in their benefit. I think it’s something like our dollar is the same as .70 cents in theirs.
There, “shameless self promotion” finished.
I’m going to link to Kathy’s Slow Sunday Stitching, and then get back to more relaxing hand stitching out in the glorious sunshine. Of course, I’m going to check out what the others in the link list are up to, as well.