I’ve finally had some movement in my stash. I used some this past week to make a backing for a quilt, and also cut some more white to keep on going with the fillers around La Passacaglia. However, the use was cancelled out and then some with some intake. Some of it is really pretty large scale florals that just might make it into the backing of my large scale floral Disappearing Four Patch swap blocks. I’m thinking they’ll be the first project put together in the New Year.
I’ve been working on La Passacaglia today, glue basting more white filler pieces for around the outside edge. I’ve gotten some sewing done on it, too. 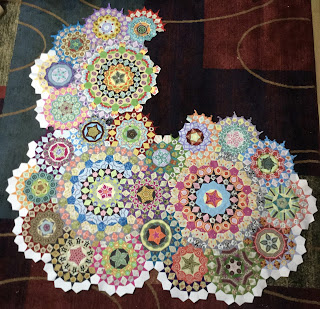 I’ve started on the top left section now. Just three more rosettes on that section to put white around, and then I can start on the top right section. It gets closer to a finish with each week that goes by. After all the white filler pieces go on comes the next decision, what to do with it next. The original thought is to appliqué it down to white borders. But looking at it here, laying on the dark carpet, I kinda like how the dark makes the rest of it stand out. Oh well, I have quite a long while before I have to decide that. What I need to do is get out a couple of lengths of white and try it out.

This is the lowest amount of fabric that I’ve used in years, I think. And I suspect a lot of that is caused by my obsession with La Passacaglia. It’s taken up so much of my time that I would ordinarily have spent machine piecing quilts, rather than the intense hand piecing this has taken. But I don’t regret on single second spent on this project. It has been enjoyable all the way through. I’m linking to Judy’s Stash Report and Kathy’s Slow Sunday Stitching. Then it’s back to more stitching.