Matt and his cousin Seth came to the house today to do some repair work today. the area under our kitchen window was open to the outdoors.  That area from the door where it juts out, all the way over to the side of the house. It originally had particle board under there, that had rotted out. 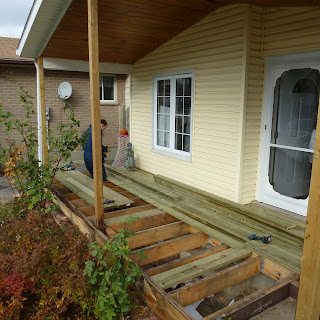 Consequently, it has also been open to mice. (yuck!!!). So they came today and sealed up that open area, and then got most of the front porch re-floored as well. What a relief to finally have that done. The warmth in the kitchen is noticeable already. The floor in there has been cold for years, and it is cold no longer. Woohoo!! They are such great guys, to help us this way. 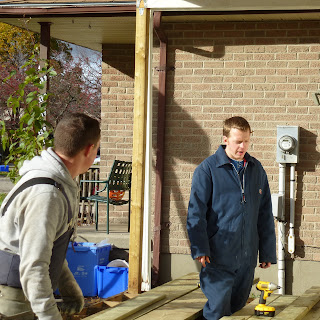 I had planned on sewing all day while they worked, but I ended up babysitting Seth's son Noah, instead. He is such a sweet boy. Very active, and very talkative, and his favourite word is "why". But he is obedient, listens when asked to do something, or not touch something. I had a great time with him today. It's been a long time since I had an excuse to read The Cat In The Hat. I wish I had thought to get a picture of him. Seth and Noah were here until about 5 pm, when they had to head back home, but Matt stayed later, until it got too dark to work safely. So, I did get some sewing time in. I worked on the last 2 weeks' worth of Grandmother's Choice blocks. they are done, and the sashings added to them.

I'm not quite caught up with these squares. I've skipped one that was a rerun variation of one of the other squares. The square on the left that I did today was supposed to be an American flag, although I didn't have any star fabrics. But I'm thinking of substituting in a Canadian flag block, if I can find one that fits. And that's it for today.
Posted by Cathy at 21:40