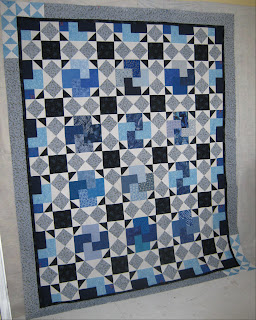 It's Monday morning, again. I love Mondays, for the opportunity to look at all these lovely walls at Judy's Patchwork Times but I'm not so fussy about the morning part. We don't get along too well, mornings and I. I've worked
3-11 for so many years, that, even though I would like too, my body simply won't sleep much before 1 am, and that only accomplished with medications. So waking up the next morning is always a long process. However, I have my second cup of coffee in hand, and can now think clearly enough to put down a thought or 2. My Card Trick quilt, which was my UFO challenge #6, is now a finished top. The picture is a little too much on the grey side, but I don't know how to compensate for that. I am really happy with how this turned out. I had somehow goofed, and ended up with too many 1/4 square triangle units, so I put them on opposite corners of the border, to use them up. I was going to add another dark border to it, but when I hung it up to look at it, it told me that it was done. So, I'll use the dark blue for the binding instead, which actually will add the finishing dark border that I originally wanted, just very narrow. So, my goal for today, provided work doesn't call and offer me a shift, is to get the backing fabric out and ironed (groan), pieced, and hopefully this quilt loaded onto the machine. I think it is going to get an overall type feathery thing on it, in blue variegated thread.
Posted by Cathy at 11:10