I have a new favourite tool 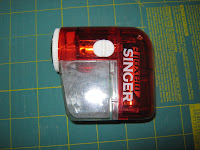 I  have a new favourite, non-quiltey quilting tool It showed up in my Christmas stocking from Noel and Laurie in the form of a sweater shaver. Now, I don't have a lot of sweaters, and the ones I have don't need shaving, so I was at a bit of a loss, at first, as to what on earth I was going to do with a sweater shaved. But then, as I was working on a quilt on the longarm, checking it for stray threads, I had an "aha" moment, and grabbed the, now renamed, quilt shaver. It picks up stray threads, and bits, you know the kind of stuff that comes off the back of the quilt when advancing it forward, or the threads that appear between seams. Every time I advanced the quilt, I did a pass over the top, before starting to quilt it. This is so much easier than my usual 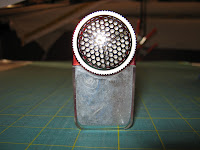 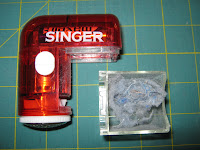 method of a small pair of scissors, and a roll of duct tape, to pick up the strays. I used it while I was quilting Card Trick, and the picture below shows the stuff that came off it. All neatly contained in the catch container, rather than on the quilt, or my clothes or, the usual place. the floor. Thank you, Noel and Laurie.
Posted by Cathy at 14:29