There was a workshop sponsored by the London Friendship Quilters Guild yesterday, that I went to. It began at 9 AM, which meant Gail picked me up at about 20 past 8 AM, a time of day I very rarely ever see. As Gail said, it wasn't pretty, LOL. However, it was worth it, and I had a lot of fun. The workshop was all about making things from selvages, something I've never done before. I don't save selvages, but Charlene was willing to share hers. A lot of the techniques and blocks that Gail and Christine showed, would also be quite suitable for strings and 1 1/2 inch strips, both of which I have in abundance. I came home from the workshop with one thread catcher made from salvages, and the front of a second. 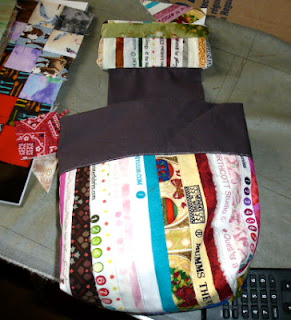 That top piece will be filled with beads to give it weight, so that it will sit on the edge of the sewing table and act as a pin cushion. I don't have any beads as yet, so i just sat a heavy bottle on it last night to keep it in place. It has been initiated with threads and snips already. There still hasn't been a whole lot of time for sewing around here. The clean out and reorganization of the contents of the sewing room/studio continues. However, I did spend most of yesterday, between the workshop and the later in the evening doing some fun stuff, so there is a bit of yardage out. I was going to count using inches, rather than point something of a yard, but I've changed my mind. It will be too ponderous and confusing to do that, so I am going back to the decimals. However, I can add the finished units of a leaders and enders project that I've been working on over the past year to my totals, so in spite of not much sewing, the totals are good.

My goal for today is to get the shelving units in my studio all cleaned off and out into the garbage pick up for tomorrow. They are really beat up and ugly, so I don't want them in the new space. Then all the stuff that came off them is either going into boxes, or into new places in my existing room. And I still have a lot of fat quarters, or parts of fat quarters that need to be either put away as fat quarters, or cut into usable units. What a horrendous job this has been, but the end is in sight, and it will all be worth it once it is done. And it will sure make me think more than twice before just tossing fabric into a bin, rather than folding it and putting it away. LOL!
I'm linking up to Judy's Patchwork Times and her stash report.