On the needles, August 23

I think I'm starting to get the same affliction with knitting that I have with quilting.... too many projects going at once. And I'm not sure, at the moment, that I even know where they all are. I have a pair of socks going, no picture because they are currently buried under something. I have a sweater going, and a really fun and cute scarf/hat/balaclava for Avery. I'm combining 2 patterns for this one, both of them free downloads from Ravelry. The bottom of it is from this pattern Hat in Alpaca I'm hoping that it will substitute for a separate scarf for him. And the the rest of it is from The Bunny Toddler Balaclava I like the way that one has the ability to cover the mouth and nose, and have a section that comes down further on the forehead. And the bunny ears are just so cute. 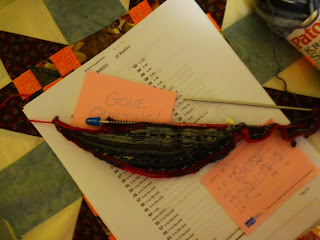 And then today, I made my second attempt at the Dreambird Shawl I tried it yesterday, and messed up somewhere, so ended up ripping it out. So today, after doing up the rest of the tomatoes and getting 5 more quart sized jars, I sat outside and started attempt number 2. The first time, I just went by the written instructions, which didn't work out very well, so today I combined the written instructions for the how-to, with the line counts for the exact numbers, and it worked. I have one feather done. It's hard to tell, at the moment, how well the 2 yarn colours are going to contrast. They both have grey tones in them, but I'm committed now. And the backdrop to Dreambird is the pile of my 4 completed blocks to Road to Brenham. I'm starting to put together some of the other blocks, as well, so that I'll have some done and won't be quite so far behind when we get back from vacation.
I'm linking up to Judy's On the Needles There are more Dreambird Shawls to see there.