On the needles, and peaches....

I have another pair of socks on my needles. They started out as a pair of toe up socks. But when I got one finished, and tried it on, the foot was too short, and I didn't like the way the toe felt.... go figure. So, I ripped it out and started over with the pattern that I originally learned. 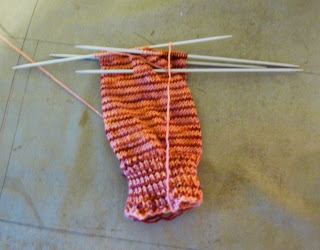 I had great plans for today. I was going to do up a whole pile of peach chutney, and I was going to get Maureen's Mystery quilt loaded and started. As usual, I rather overestimated what I'd be able to do in one day. We went out this morning and picked up a box of peaches for $9.00. They were considered seconds, since they has marks on them, and were smaller than what could be sold in the regular baskets. But, since I was planning on peeling them and cooking them, it didn't much matter. They were semi-free stone peaches, so they were supposed to be easy to cut and quarter. Well, I wouldn't exactly have called them easy, so it took a lot longer than I thought it would to get them all cut up and ready to cook, like until 3:15 in the afternoon, after starting at 12:30. I used this recipe, except I left out the orange. It took until 6:30 to get it all cooked down. All that work, and all that time, and I got 4 1/2 pints of peach chutney. We had some of it for supper with our ham.... it is soooooo good, and worth all the time and effort it took to make it. During that time I was able to get the binding for my Dresden Plate all made and ready to be sewn to the quilt. Then, it was time for dinner and then cleaning up after dinner. The chutney had used about 2/3 of the peaches, so I've spent the rest of the evening, until sitting down here, blanching and peeling and quartering and pureeing the rest of the peaches, which are going to get cooked on low over night in the slow cooker for peach butter, instructions here.
So, tomorrow the peach butter will get put in the jars and water bathed, and then I'll load Maureen's quilt. I'm linking up with Judy's On the Needles, and then I'm going to put the foot of my recliner up, put a movie on, and knit.
Posted by Cathy at 20:13