"In the Village" customer quilt.

A couple of weeks ago I received a call from a lady named Carol, wondering if I could quilt up a project of hers. I was so excited, since she is a new to me customer, so of course I said yes. Then she added the time line. She needed it before the Easter weekend. No problem, all of my customers have wanted rush jobs before, and none of them seem to have a problem with others doing the same thing. SO she brought it over, and I have to say the it is the most unique quilt I have ever done. 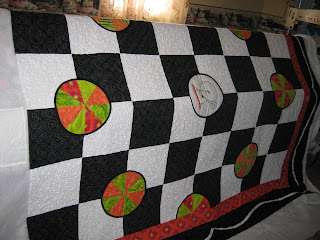 It was intended as a wedding gift for a friend of hers that loves the show from the 1960's called "The Prisoner". Carol blogged about it here, showing the finished quilt, and in the previous posts about the show and the symbolism and graphics taken from the show. I do remember the series from the 60's, although I don't remember ever watching it. What stands out most in my mind, was the large ball that would be bouncing down a hill, or something, during the beginning credits. 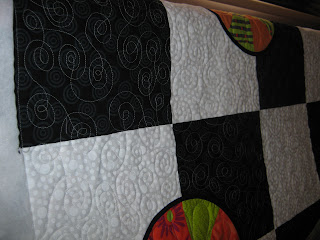 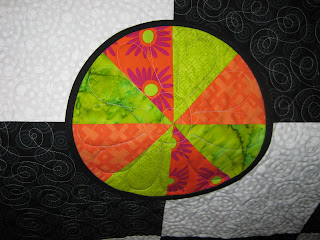 I used the large daisy like flower in the floral fabric as the jumping point for the motif in the umbrellas. And then in the very center of the quilt is this antique bike 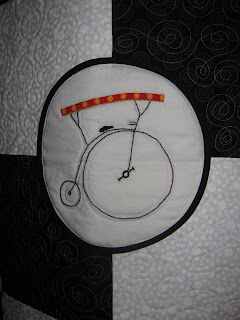 which was simply stitched around to highlight it. This was a fun, and definitely challenging quilt to do, not because any of the quilting was difficult, but because it needed to highlight and accent the story being told in the quilt. Thanks, Carol, for trusting me with your quilt.
Posted by Cathy at 13:14