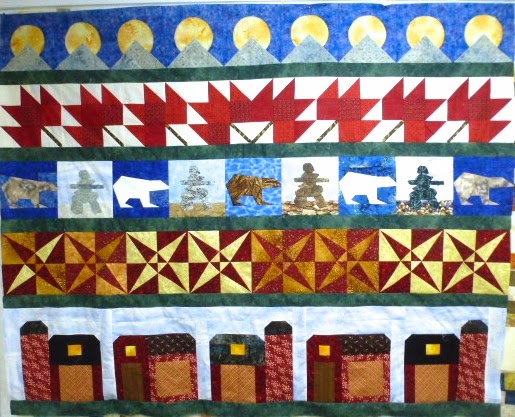 All year long, beginning last September, the guild has been working on a Canadian themed row of the month quilt. The program committee met a year ago, and we brain stormed all kinds of ideas of what Canada meant, and what blocks could represent those thoughts. I took those ideas, and built up a design in Electric Quilt 7 based on those ideas. We also obtained permission from Margaret Rolfe to use some of her paper pieced animal blocks in our quilt, and of course, gave her credit for those.
The first row is Moon Over the Mountain, for the Rocky Mountains on the west coast of the country.
The second row is our Canadian Maple Leaf.
The third row is made up of Inukshuks and bears. The bear pattern was courtesy of Margaret Rolfe.
The fourth row is called Crossed Canoes, for our Native Indian heritage.
The fifth row is barns and silos, meant to represent the prairies.
The sixth row is the personal one.
The seventh row was meant to be the paper pieced loons and beavers, both very iconic Canadian animals also used by permission from Margaret Rolfe.
The eighth row is trees, representing the vast amount of forests that cover our country.
The ninth row is actually a variation on the Snail's Trail block, but I thought it looked a lot like waves, so that row represents the oceans that border our country on three sides.
Every month I've been sewing up these rows, and writing up the instructions for them. It's been a mystery for the guild members, as they haven't known from one month to the next what the next row will be. The last month's row is being handed out this Thursday. After that, there is one more that they have to make themselves, showing what Canada means to them. Shown here are the top five rows, and the bottom three rows. There is still one more that I have to make. The top row in this set in the picture below, is this months row, and it was supposed to be a set of loons and beavers from Margaret Rolfe's designs.

However, there has already been a lot of paper piecing in this quilt, and I really didn't want to do any more. And, we've been encouraging the members to take the basic ideas, and then make the quilt their own, so that's what I did with this particular row. I had some fabric in my stash that I'd used as a backing years ago, that had geese and ducks and loons in it.

My first thought was to take that fabric and do the entire row with it. But then I wondered if it might be possible to find other fabrics that would blend with this one that also had animals in it. So, off to Lens Mills I went, and hit the jackpot.
I found deer 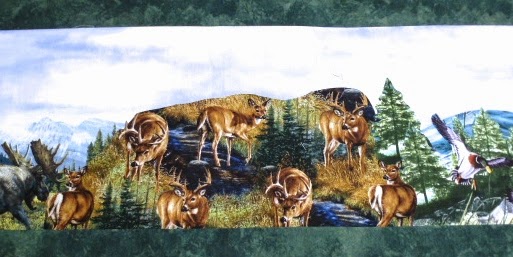 and then I found bears and moose.

I spent most of Saturday afternoon and evening working on cutting and laying out and then fusing that row. I have one more row to do..... my personal one, and I already have a plan. Then all that's left are the borders. And of course, no Canadian quilt is complete without the Canada goose, so the borders are going to be made up of flying geese.
I'm linking this post up to Judy's Design Wall Monday. Then I think it just might be time to play with La Passacaglia some more.