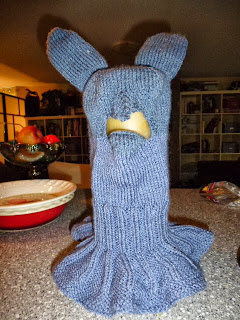 I'm still in finishing mode. Woohoo!! When Scott and I went out for our drive on Monday, I couldn't just sit and do nothing while in the car, so I finished up Avery's Bunny Balaclava. I'm pretty sure it will look a lot cuter on him than it does on my spaghetti container. But that was the only thing I could find that was tall enough to hold it up so I could get a picture. The nose section folds down, away from the nose and mouth, if it isn't cold enough for it, or if it turns out he doesn't like the stuff over his face. 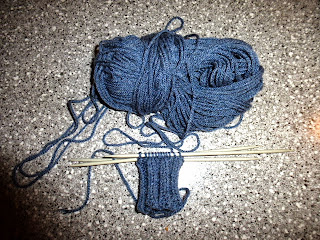 Then, since I have lots of this yarn left, I decided to start some mittens for him. These will be my take with me in the car project for the next little while, until they are done. 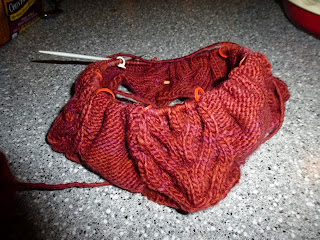 And since I've gotten most of my knitted projects done, I started the Pinery sweater. It is knitted from the top down, and I'm loving the looks of the cables. It's worsted weight, so it's going fairly quickly. I'm not 100% happy with the way the neck is laying. There isn't any ribbing, or leading edge before the cables start, so  the cast on stitches are really pulling. I might end up doing some kind of edge finish once it is done, but I'll have to wait and see how it looks once done and blocked.
I spent a little time on Ravelry the other day... actually over an hour... ummmmmm, it might have been a little more than an hour....what a time gobbler that place is, but fun!. And I found a whole pile of fun little boy sweaters. I'm planning on going through my yarn stash, which actually isn't all that large, to see if I have yarn to do some of them. There's a Spiderman, and I know I have red yarn. There's one with a truck which would be perfect for Avery. He loves all things trucks. And then there's a dinosaur fair isle pattern. And I found the cutest owl sweater. There isn't enough time in one life to do all the quilts I want to do, let alone adding all the knitting I want to do. Somehow, I'm going to have to do some prioritizing........ any suggestions?? I'm linking up to Judy's On the Needles.
Posted by Cathy at 13:02