Well, I just finished my second cup of coffee, and am now into my third, which means my brain is at least partially functioning. I thought I'd write this now, while I'm thinking about it, rather than leaving it until later, since I have a bad habit of leaving things until later, and then they never get done. I'm trying to correct that habit.
Much as I want to continue knitting on my sweater for myself, it's that time of year to start knitting for others. I have all kinds of stuff I want to do, so I thought I'd better get started. 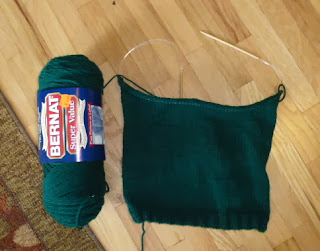 So, this is the back of the sweater. It doesn't look too interesting, so far. I have 2 of these big balls of this green, and 2 more of them in red. I must have been thinking of Christmas knitting at the time, in the rather distant past, that I bought them. But they are good for kids sweaters that will get lots of wear and lots of washing. This has knitted up in the past 2 evenings while watching TV, so it shouldn't take too long to do. I'm doing the back first, and then the sleeves, before doing the front. Oh right, I forgot to say that this is the Truck Sweater that I found on Ravelry, which I'm doing for Avery. I might need to purchase some smaller balls of yarn for the graphic on the front of the sweater, but at least I can get the rest of it done ahead of those purchases. I have some scraps of other worsted weight yarns here, though, that might work. And thinking about it now, his Daddy has a white pick up truck, so maybe I can change the graphic to look like that. Hmmmm...... have to think about that. I'm linking up to Judy's On the Needles. And then I really need to get this day started. I'm going to do some more quilting on the Road to Brenham quilt, and I really hope that all the thread shredding issues I had yesterday, that I talked about here, don't continue today. I ended up having to switch cones of thread. After that, I got 1 1/2 passes done with no problems.
Posted by Cathy at 12:09