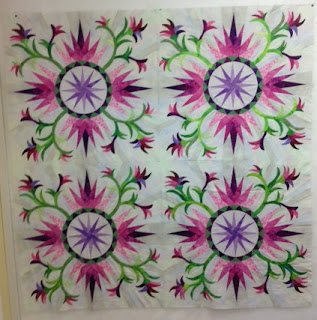 I've been working on my getting it done challenge list for April. The first on the list was to get Cactus Rose out of its long neglected box, and get these 4 squares sewn together. This is a pattern by Judy Neimeyer, but I discovered when looking for the link, that the pattern has been retired, which shows how long I've had this on the go. I was really nervous about sewing this together. The instructions that came with the pattern said to make the whole 71 inch square quilt, and then do the applique. I didn't want to be doing hand applique on a project that big, so I did them one square at a time. That caused the pieced edges of the squares to stretch. But, they went together not too badly, with a little easing here and there. So the next stage for this one is to start working on all the paper pieced border units. I think the next few months are going to have a certain number of them assigned each month. That way it won't be quite so overwhelming. 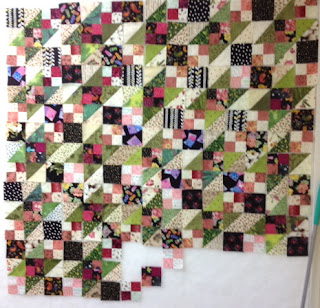 The other thing on my wall is the beginnings of step 2 in the Bonnie Hunter mystery that is running in the Quiltmaker magazine. It's called Lazy Sunday Mystery. The picture was taken with my iphone, so it's not the greatest, but it will do.
I'm linking up to Patchwork Times design wall Monday link box. Then I'm off to make myself another cup of coffee..... French Vanilla..... yummmmm.... Then I have quilts to load.
Posted by Cathy at 13:58