We're home from our camping weekend.

We had a wonderful weekend, camping up at the park near Noel and Laurie's home. Other then the first day and night we were there, when it was quite cold, the weather was perfect. I don't know if there were temperature records set, but it was a glorious and warm weekend away. Lots of time spent outside, chasing the shade, relaxing and reading. Unfortunately, the wireless reception at the park was kind of hit and miss, so I wasn't able to do any blogging from up there. And, of course, there was time spent with family. After we arrived on Thursday, and got the camper mostly set up, we headed over to have supper with Noel and Laurie, Bill and Jan, who are Laurie's parents, and with Laurie's Grandmother, affectionately known as Gee-gee, short for Great-grandma. And, of course, we can't forget the birthday boy, Avery. 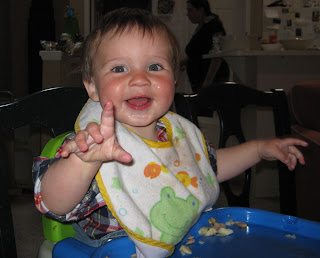 When we had Laurie's baby shower, before Avery was born, Becca and I put our heads and hands together, and made the cake for the shower. Considering neither of us had ever attempted making a tiered cake before, It turned out beautifully. 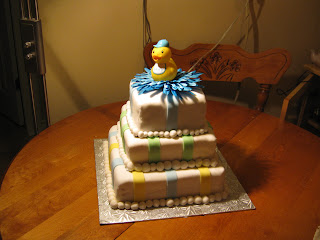 Once the shower was over, we had the top tier of the cake left. Jan very carefully wrapped it up, and stored it in her freezer, with the plan of keeping it, and taking it out to have as dessert for Avery's first birthday. I am still blown away by how fast that time passed. 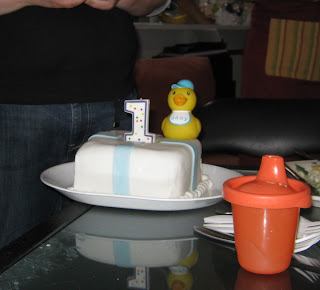 I think this might be the first time Avery has had chocolate. He had a fabulous time with it. 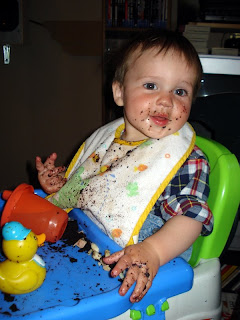 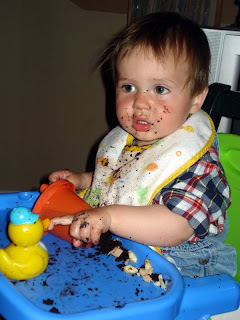 I don't know what it is about babies, and chocolate cakes and pictures of them with the cake all over their faces, but they are always cute, and never seem to get old, for being repeated. He's not as messy as some I've seen, but he sure is cute. It was fun to watch him take a tentative little pinch of the cake and taste it, and go from there to big hand fulls. What a joy he is. And he continues to turn this Grammy's heart to a melted puddle of mush. I actually have a video of him eating the cake, but I haven't had the time to upload it yet. I'll most definitely share it once I get that done.
Posted by Cathy at 10:57