Stockings update, and other stuff......

We went for a lovely, if short, drive yesterday, to pick up our meat order. I really didn't know what to expect, since we've never done this before. There is a lot of meat in a quarter of a cow. This should keep us going for a long, long time. It took quite a while to figure out exactly how we were going to store in in the freezer, so that it would be at least semi-organized, rather than just dumped in there. I finally decided to put the things that are the same into large freezer bags together, and label the freezer bags. The meat is already labeled on the freezer wrap, but I thought there might be a chance of it getting smudged over time, so re-labeling it couldn't hurt. Everything got put into freezer bags, while still wrapped in the freezer paper, to give it added protection from freezer burn, since there is enough there to last us a lot longer than just a couple of months. I can't believe how excited I was, and still am, about this whole process.

I was talking to my dear friend and sister in the Lord and kindred spirit, Susan on facebook chat the other night, and we got to talking about the Christmas stockings I'm doing up for the kids, and how far I've gotten, so I said I'd take pictures and show her. Matt's is finished, or at least the front of it is. 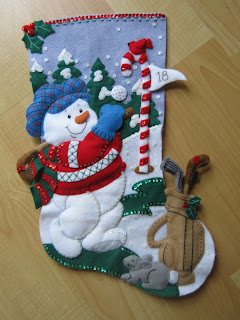 I was going to put his name on it, but then I figured that it is obvious whose it is, and that it would be an unnecessary step. The golf clubs in the bag actually sit in there, and can come out!! This has been so much fun to do. I've gotten a start on Becca's, as well, and it is going a lot faster than Matt's did, simply because I now have a better idea of what I'm doing. 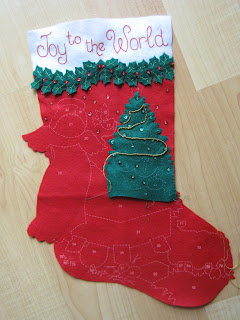 It will be a manger scene when it is finally done. These stockings have taken over the time I used to spend doing applique and knitting, but it will be so worth it when the kids see them. I hope they love them as much as I think they will.
And now, I have lots of stuff to do. I was waiting for a shipment of bobbin threads to come in, so I was stuck for doing any more machine quilting. The threads finally got here on Monday, so today's task is to take my Rose Log Cabin off the machine, unfinished unfortunately, and get working on the customer quilts I have waiting to be done. Christine's goes on first. I also want to do something about getting some asparagus done down for the freezer. And then we are going for our first camping weekend on May 17th, which also happens to be Avery's first birthday, so there is some work to do to get the trailer ready, and packing done. And then Laurie has asked for some more all in one diapers, and I'd like to have them done before we go up to see them so that I can give them to her then. And, somewhere in there, I have to fit in 2 shifts at the hospital over the weekend. Whew....... I'm tired just writing all that. If I'm absent for a while, this will be the reason.
Posted by Cathy at 12:20