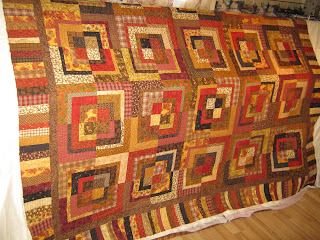 Christine picked up her quilt today. It is a lovely Fractured Square, done in wonderful autumn colours. She backed it with some lovely flannel  fabrics, in a pieced backing. It is difficult to see the quilting design, but it is a pantograph called Leaf Pile by Donna Reinarts. 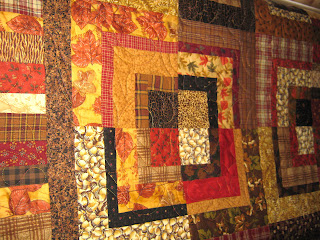 After Christine left, Scott and I went out to get some asparagus. We've bought firewood from the same place for years, but it wasn't until this year, when I was researching for organic supplies for the freezer, that I found out that they also grow and sell organic asparagus. It's a place called Mazak Farms, and it is just a pleasant 15 minute drive away. Scott's never really had asparagus

before, so we only got 4 pounds of it, as a start. We had some for supper, and he has decided that he likes it, so we'll probably go back for some more, if we get time before it goes out of season. The house smelled wonderful, as we were blanching it and getting it processed for the freezer.
As we were coming home, we passed a place that was selling rhubarb, so we stopped and picked some of it up, as well. There were some apples here, getting old, so we decided to cut them up, and mix them with some rhubarb, for an Apple Rhubarb Crisp. Yuuuummmmm........
It's been a long day, with lots of time spent standing in the kitchen, so tonight, I'm going to sit in my comfy recliner and watch some of Season 7 of Star Trek, the Next Generation, and work on Becca's Christmas Stocking. I'm working the weekend, so I need to take it easy for the rest of the evening.