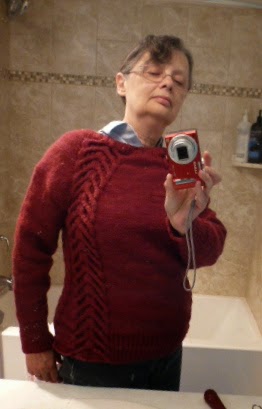 Well, I finally did it. My Pinery sweater is off the needles. It still needs ends sewn in, and blocking, but it is finished enough to be able to try it on and attempt to get a picture. This selfie business is difficult. I first tried it with my cell phone, but my arms aren't long enough to get a picture and push the button at the same time. So, I resorted to the old take a picture in the mirror trick, which wasn't the easiest thing either. But here it is anyway. It is wonderfully
warm and soft and oh so comfy. I don't want to take it off. But, that will give me the motivation to do the boring chore of sewing in all those loose ends and get it blocked so I can really wear it. Sometime this summer, I will try and get Scott to take a picture of me wearing it while standing beside the sign of the park for which this sweater was named by the designer. 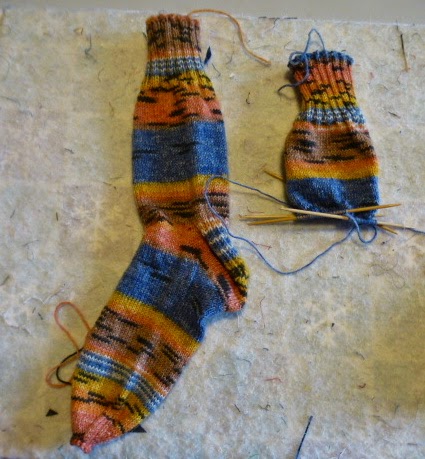 In the meantime, I've been working on a pair of socks. I did a lot on these while we were holed up in the trailer last week, during our extremely cold camping trip. It's an Opal yarn, but I don't know the colour name. 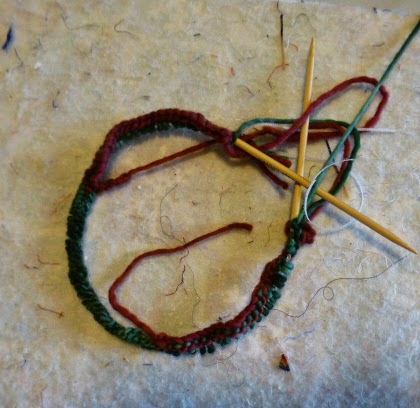 And the a couple of days ago, I started the cast on for a new sweater. It's going to be a challenge because it has some new techniques in it, starting right off with a provisional cast on using a crochet hook and a backwards loop cast on. It will be a lovely warm sweater, made out of the same Malabrigo worsted weight yarn I used for Pinery, only in a lovely green. The pattern I'm using is Flyaway hoodie. Obviously, it doesn't look like much, yet. The socks are my take along, don't have to think much project. This sweater, on the other hand, is going to take lots of thought. But I love doing new things. It keeps my almost 60 year old brain from getting any more befuddled than it already is. I originally started another sweater using this green yarn, See You There, which is another hoodie. But, after doing the first repeat for the cable design, discovered that the design wasn't going to show up using this green coloured yarn, so I ripped it all out. I might just have to see if the is a cream coloured malobrigo, so I can do that sweater too. I'm linking up to Judy's On the Needles.There are lots of fun knitting projects to see. I always find at least one that I want to add to my ever growing knitting wish list.
Posted by Cathy at 13:22