I've switched up what I'm stitching. I've had enough of My Tweets for the moment. I think I'll put it away until the summer, when it can become my enjoy the outdoors project. So I pulled out an ancient UFO that's been on my mind ever since I found it while getting organized for moving last year. And I've come across it a few times since moving here, and each time I've thought that I should get it out and maybe try to finish it.The final incentive to haul this out was Kathy saying that the quilt she is working on is seven years old. She asked if we could beat that. 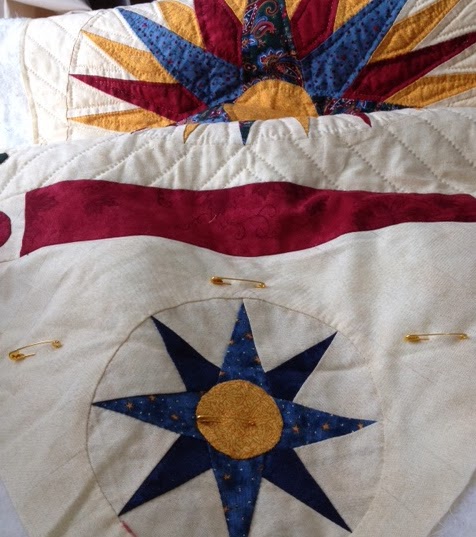 This one dates back to 2003. It's a pattern from the Quilters' Newsletter magazine that was given in four parts, starting in Nov. 2003. I only know that because I had to do a search online to find out. It's called A Few Compasses Among Friends. I do have the pattern from the magazine in a binder around here somewhere in a box. I'm going to have to find it before I can finish this. Most of this quilt has been hand pieced, and I was hand quilting it. I think I got stalled on it because I was doing a modifies quilt as you go, but couldn't figure out how to actually put it together after I got the sections quilted. I think I know how to do that now. I haven't done any hand quilting since this one got packed away, so it's going to take some time to get the callus on my finger built up. But the actual mechanics of the stitching came back as if it was second nature, and the stitches from 10 years ago don't look much different than the ones I've put in today. I'd forgotten how soothing the rhythm of hand quilting is. 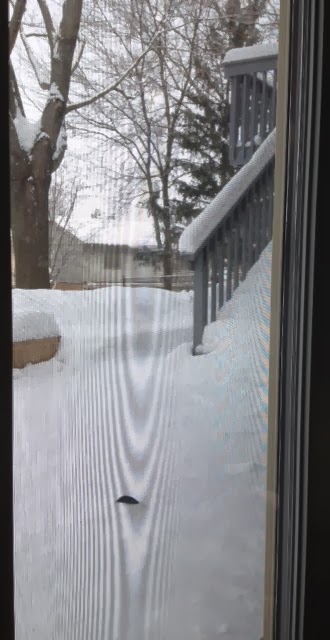 I'm sitting in my comfy recliner chair, quilting and enjoying the view out the window beside me. That weird shape in the picture is the screen. It's frozen in place, so I couldn't move it out of the way to take the picture. Our guild is having its quilt show in October. I think it would be kinda neat if I could have this done by then and enter it. So, I'll set that as a loose sort of goal. I'll try and get the rest of the components of this quilt sorted out, and get it up on the design wall by tomorrow.

As far as stash report goes, there is more out from the pinwheel blocks, and from the whites cut for my February UFO project.

Labels: A Few Compasses Among Friends