Saturday In the Pinks

February's colour is pink. I'm a day behind in getting to these. I haven't been feeling that great, and sleeping at night is a distant memory, so yesterday was spent on the couch with sock knitting. Today's a bit better, but still not great. But anyway, I got some of my pinks selected and cut out to make my triple four patch units. Four are sewn together and the parts for the last four are ready to go. 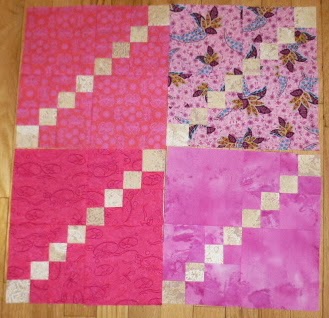 I've discovered that I don't have a lot of the darker pinks that would work with this block, and have enough contrast to allow the beige diagonal line of squares to show up. It was a struggle to come up with eight on them. The last four of these might end up getting set aside to be worked on next weekend.
I'm linking up to SoScrappy. There's lots of other fun pink stuff to see over there.