On and off the Needles

As usual, lately, I'm one day late with this. But I have an excuse, really I do. This is a long armers' busiest season, getting gifts ready for people for Christmas, and that's what I've been spending a lot of my time doing. The rest of the time seems to be spent sitting and either sewing or knitting to get my own Christmas list done. I have some knitting finishes. 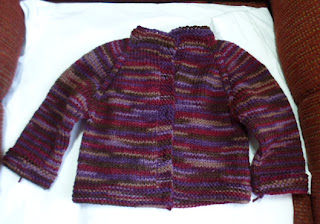 This little baby boy sweater is finished, except for sewing in the ends. I don't seem to be able to find my large needle that I use for this task, so it will have to wait until I can get out to a store. But since I need to get buttons for this, and also fabric for making pajamas, I can do it all at once. But not today. There is no way I am going near any stores or malls today, it's way too insane out there. Much better to stay at home, get lots done, hopefully, and have a jammies day. 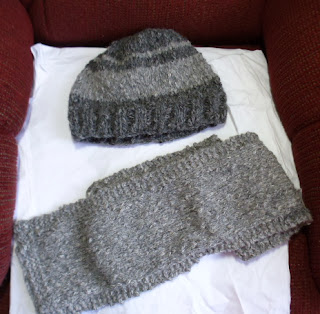 The alpaca hat and scarf for Noel is done. I really hope he doesn't turn out allergic to this, since he is allergic to wool.

And I have enough of the alpaca yarn to do another 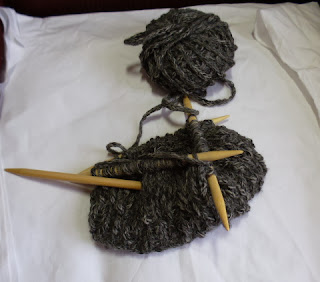 hat up, so that is what  is currently on the needles.
The ribbing section is done, and I'm just starting on the main part of the hat. It's really bulky yarn, so it should finish up in the next day or two. I've used this Dad's Work Hat for the pattern for both hats. The first one knitted up a bit large, so I've cast on less stitches for the second one, and am doing the ribbing as knit one purl one, rather than the knit two purl two as given in the pattern.The scarf was a basic stockinette stitch, with a garter stitch border.
Today's task is to start working down my list of things I have to get done in the next couple of weeks, starting with making some pillow cases to go with the Road to Brenham quilt. Binding that quilt is also on that list. And I have to get a start on the colour challenge project for the guild that is due in less than 2 weeks. So, after I link up with Judy's On the Needles, I'm going to start on those pillow cases. The fabric has been washed, but needs to be ironed, and then I'm good to go.