I DID IT!!! Woohoo, yippee, hurrah...... With ten hours to spare before the end of January 31st, Endless Chain became a finished flimsy on Tuesday. And, if I do say so myself, she is beautiful. 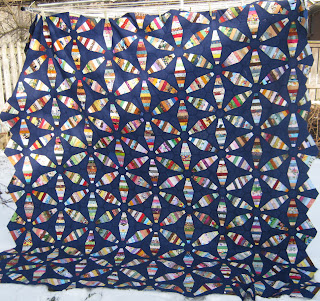 I think, of all the UFO's I had listed, this was the one that was both the most challenging, and the most work. So, in theory, all the rest should be a lot easier. This month's number is 1, which on my list, is Bonnie Hunter's Roll Roll Cotton Boll. There is still a lot to do on it, but, unlike Endless Chain, there will be no set in "Y" seams. Each and every one of the 81 hexagons in that quilt were done with set in seams. What on earth was I thinking? That makes finishing RRCB child's  play in comparison. I was going to substitute for an easier one, but on reconsidering, I thought it would be a good idea to get the intense ones out of the way before spring and summer, and spending lots of time outdoors, and going to various provincial parks. Although I have been known to take my sewing machine with me, on occasion, which causes my husband to just stand and shake his head at me. Anyway....... 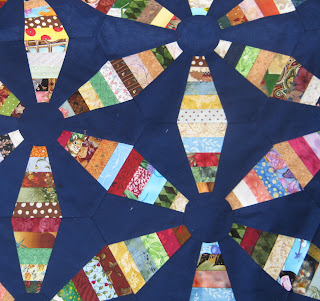 Here's a close up of a section of the quilt, and a good shot of not only some of those "Y" seams, but also of the variety of the fabrics in this quilt. I love the little mouse face peeking out. It was a lot of fun to do, in spite of being so challenging. However, I don't think there will be another like it from me. According to past posts on my blog, this quilt was started in March of 2010, so it's taken 2 years to get it to this point. Granted, there was no work done it it during a large part of those 2 years. It feels so GOOD to have it done to this stage.
I'm linking up to Patchwork Times, and the linky party that Judy is hosting for those of us who met our goal of finishing our January UFOs. And this also means that I also have something to enter for the Finish it up Friday  hosted by AmandaJean at Crazy Mom Quilts. Oh, one more thing, if anyone has any suggestions on how to quilt this thing, I would be very grateful because at the moment I am totally stumped.
Posted by Cathy at 11:11