This past week has been all about cross stitching and knitting. The next pattern for Noah’s Journey won’t be out till next week sometime, so I’ve had to change up my rotation system a bit. Rather than alternating days. I’ve been doing cross stitch earlier in the day. By the time mid to late evening comes around my eyes get tired, so I switch over to knitting. I followed a link a few weeks ago from one of our slow stitchers and found the Victoria Sampler web site. That was an eye opener. What beautiful stuff! I have ordered 2 of their sampler kits. While looking around on the web site I also found that they have a facebook page and have a free monthly stitch along. So while waiting for my kits to arrive I’ve been working on the freebies. The first is a calendar type stitch along. This is January’s. 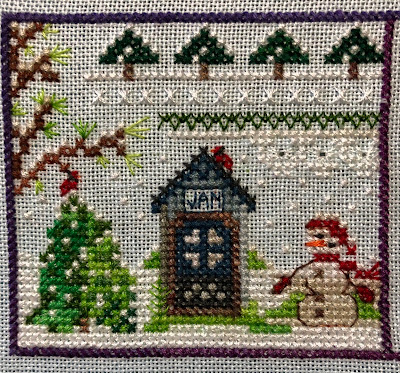 I worked on it exclusively this past week so I could get it done and be ready for the February release. The clues for each month are released in three parts, a week apart. I found on the same Facebook page this little free pattern. The cross stitch finished at 2 1/2 inches square. It was fun learning new stitches. I’d never done Colonial Knots before. After doing them I have decided I like them much better than French Knots. 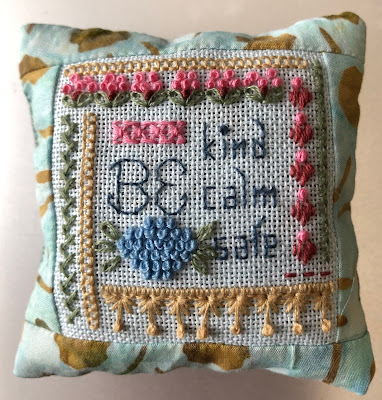 I bordered it with some coordinating fabric and made it into a mini pincushion. 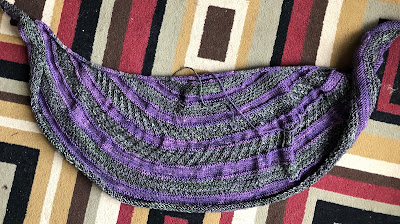 There are a total of 147 rows in the shawl design with a final count of 425 stitches on the needles at the end. Each row is taking longer and longer to knit across. But it will be so soft and warm for under my coat when it is done.I have plans this afternoon to get the ends sewn into my Night Forest sweater and then get it blocked. I’m linking up to Kathy’s Slow Sunday Stitching.