Slow Sunday stitching and other things

I’ve been missing in action for the last couple of weeks. I had a flare up up my blocked common bile duct which required another ERCP procedure. Basically that means they put a tube down the throat and thread it into where the bile duct is and they clear out the blockage. Unfortunately, one of the side effects/risks of this procedure is that the pancreas, which opens in the same spot os the bile duct, can get irritated. If it gets irritated it does all sorts of nasty things. Well, mine got irritated and it was nasty and led to 4 days in hospital on IV fluids and IV anti nausea meds that didn’t really work. That was 2 weeks ago and I’m still feeling the effects of it in decreased energy levels. But it’s getting better.

At the beginning of the year I came across a design for a temperature tracker quilt that I really liked. I’ve been tempted by the concept for quite some time, but haven’t liked any of the variations of designs enough to actually do one. This design is found on the blog Canuck Quilter designs in her post Temperature Tracker Quilt. After I saw that I went shopping for fabrics and found a wonderful Kona Fat Quarter bundle at Mad About Patchwork called Aviatrix in Summer which had enough colours in it to be able to get a gradation for the temperature quilt. I started the quilt last week and have the first three weeks of January done.

I’m planning on doing the rest of this first month of the year today.

My slow stitching has been knitting on a sweater. It’s a pattern called Flat White by Casapinka. 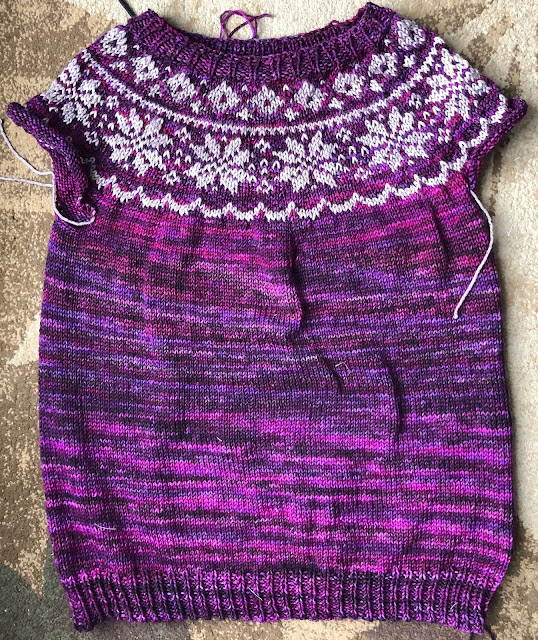 There are so many of her designs that I really like. All that’s left to do is the sleeves and they will go fast since it is made using  one of my favourite yarns, worsted weight Malabrigo Rios. The purple is the colour Sabuduria and the colour work part is Sand. If I keep going on this sweater without getting distracted by something else it will be my second knitting finish of the year. I finished a long cowl earlier in January but don’t have pictures of it yet.