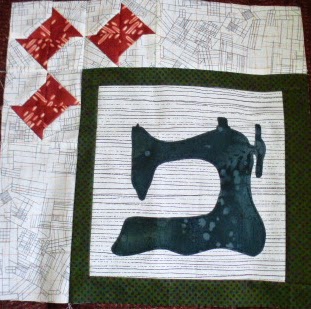 This past February, Gail from The Cozy Quilter, approached a group of us wondering if we would be interested in participating in a round robin. Four of us agreed to participate. We were to each do a center square, pick out some of our own fabrics to go with it, and then pass it around, taking a month to work on each others' projects. This past Thursday we gathered together at Gail's for a reveal party. It was so much fun to see what each of the projects finished up to be. Each of us that were participating have blogs, so we decided that we would blog about our own project and link to each others. This is how mine started its journey. I decided that, since this would be going out into unknown territory, I'd start it with something I normally don't do, which is asymmetry. I also don't ordinarily use the type of background fabrics that are in this. I found the design in the latest Quiltmakers' 100 blocks magazine. I haven't got it immediately to hand to be able to give the designer's name. 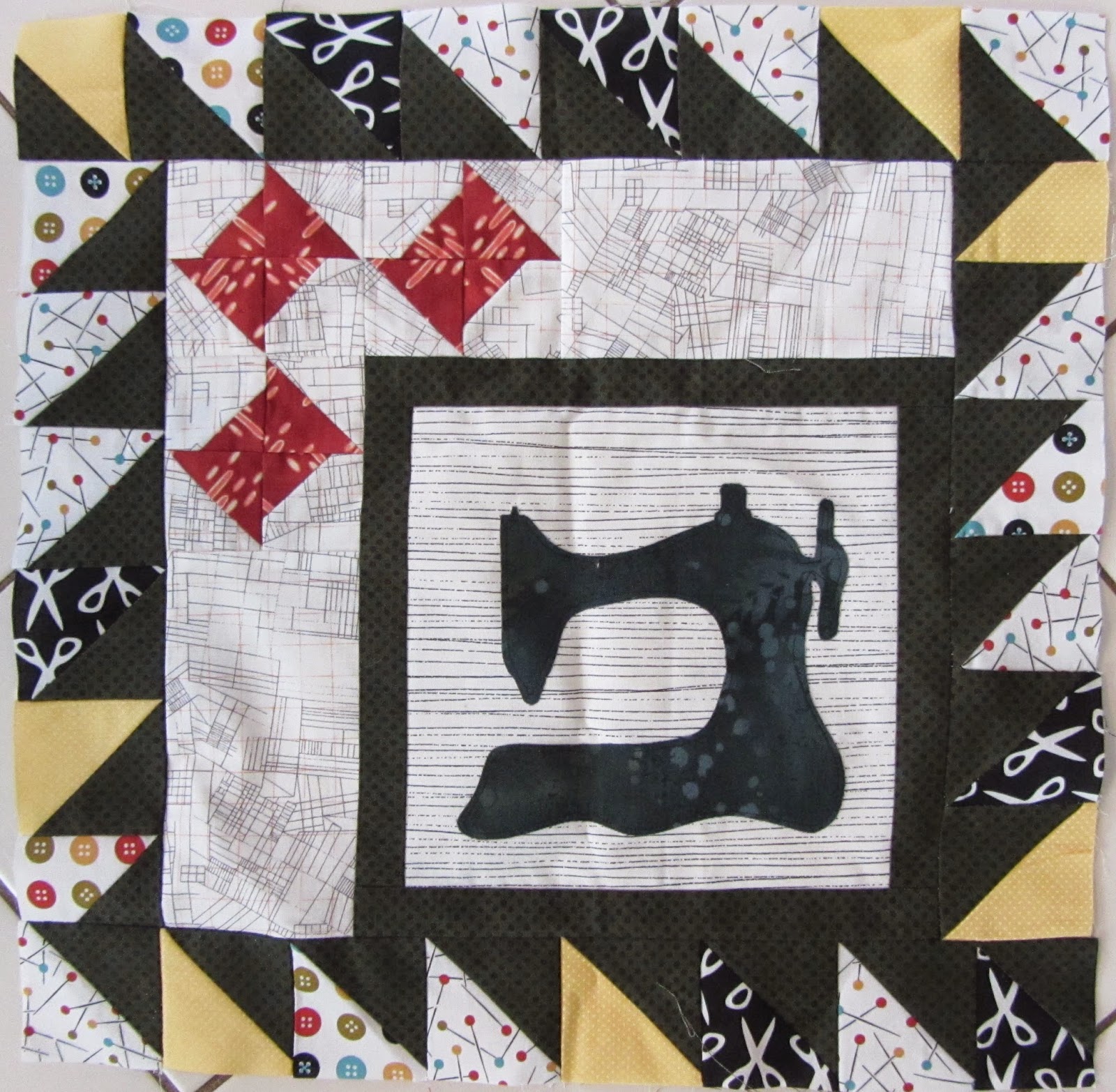 The first place it went to on its journey was Christine's house. She used the fabrics that I enclosed, a lot of which had a sewing theme, to add the liberated triangles border. I love the pop of yellow in it, and also the black on black triangles. 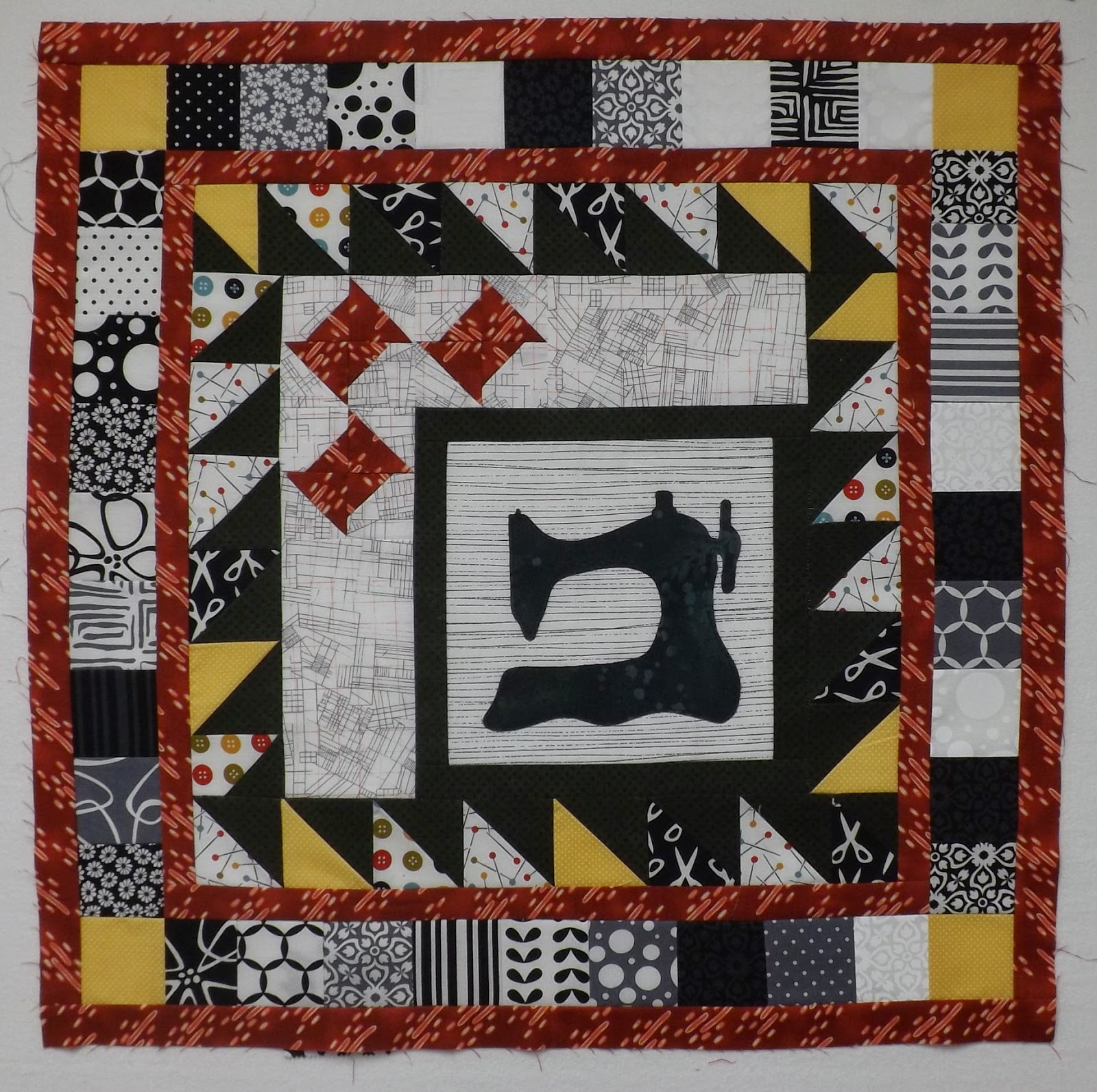 From Christine's, it traveled on to Jacqui's. She said she tried a few things on it, including carrying the spool theme out into the border. But, in the end, the quilt ended up being very bossy, and insisted on having a narrow red border, followed by some simple squares and then another narrow red border. The quilt knew exactly what it needed, and I'm glad it talked to Jacqui. I love that she continued the yellow out into the corners. 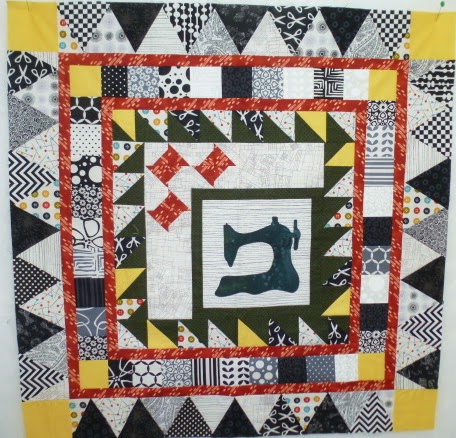 From Jacqui's. it traveled on to Gail's. While there, she added the 60 degree triangles around the outside, again using the yellow as an accent in the corners. She added some of her own fabrics to it, and kept the 60 degree triangles mostly in shades of black, with just the occasional pop of colour. I love the way it turned out. I had no idea what to expect when it came back, and I can only say that I am thrilled. This was a very fun and very challenging experience, and I would willingly participate in something like this again.


Here I am, looking extremely happy, after getting 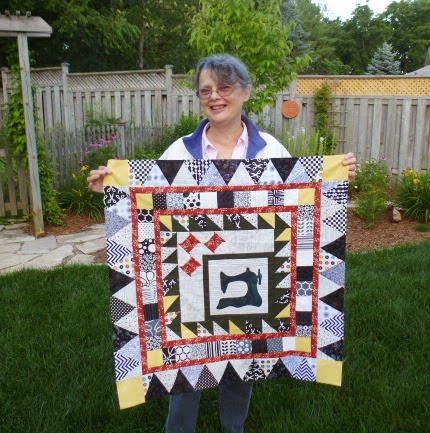 my quilt back. Thanks ladies, for all the work you did, and for all the fun this was. You can read about
Gail's here at The Cozy Quilter,
Christine's here at Quilting at Balmoral Cottage and
Jacqui's here at Treadle Quilts.
Once I figure out how to quilt it, it will hang in a place of honour in my long arm studio.