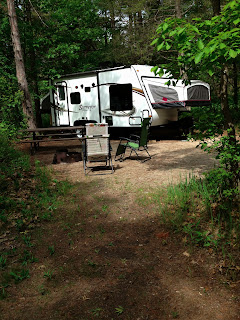 It has been a dream of mine for many years now, that when Scott and I retired,  we would upgrade our travel trailer from a hard top tent trailer, to what is called an expandable or hybrid trailer. They have the small size and weight that we needed in order to be able to pull it with our existing vehicle, but have the floor space and features we wanted for comfort. Well, on Tuesday, that dream came true. We took possession of our new Surveyor Cadet. Tuesday morning was spent getting the new tow package put on our car, and the afternoon was spent with an orientation to how the thing works. Then, because there was no way we could leave it there and not use it, plus we needed to reinforce everything we learned, we decided to take off with it for 3 days to the Pinery Provincial Park. The Pinery is only an hour from where we live, so it was a perfect test destination. So here we are, all nestled quite comfortably under the trees. It took quite a bit of trial and error to get it backed in there under the trees. There is quite the learning curve to backing it up and getting it to go where you want it to go. But no trees, trailers, cars or husbands or wives were injured during this production. *giggle* 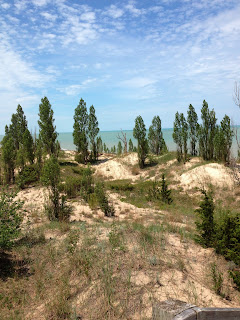 This park is huge, and has the most glorious sand dunes between the campgrounds and the beach. We went for a walk this afternoon, and took this picture from one of the boardwalks that crosses over the dunes. Something about all the colours found in this scene spoke to me - browns, beiges, green and blues, my favourite colour combinations. The campsites, for the most part, are large, with plenty of space between them for privacy. There aren't a lot of people here at this time of year, but it isn't empty like the ones we went to back in May were. But the population is distinctly older, at the moment, since schools here don't let out for the summer until the end of June. Another bonus to this park, besides that fact that it is beautiful, and close to home, is that it is too far south for bears, or at least I'm assuming that's why there are no bears.
Anyway, I think I'm going to end this off here, and knit on a pair of socks for the rest of the evening. I started my fifth pair of socks for this year last Monday.