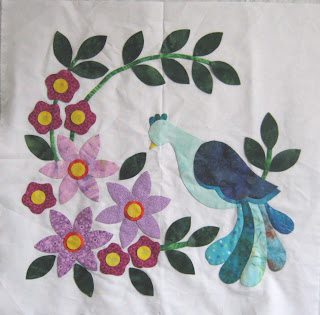 I still don't have much up on my wall. But I can show you "My Tweets" block #3. Block #4 come out on April 15, and I have some of it prepped, and glue basted down, but not enough to show yet. I was hoping to get more of it done while we were up in Collingwood, but I spent the spare time that I had reading, instead. Like all of my other projects, I'm behind in this one as well. I reall want to start a new quilt. I've had the pattern for a while, and I love it It's called "Bear Tracks" and there is a picture of the pattern here I've pulled all the fabrics I'd like to use for it, and even cut out and did enough half square triangles last night to do 4 of the paw blocks. Here is a pic, although not a very good one, of the fabrics I've pulled. 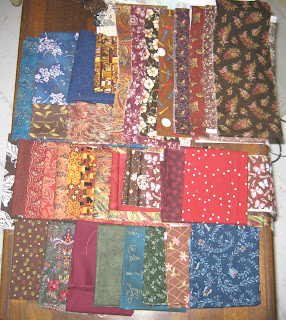 But, I have 3 customer quilts that need quilting, and I really have to use some self discipline and get them done before that baby up in Collingwood decides to make his appearance. I promised one of them by the end of the month, which is only 5 days away. I'm going to have to ration my viewing of the design walls, over at Patchwork Times as well,or I'll never get anything done today. I'd like to get that quilt at least loaded onto the machine today. And as long as I sit here, nothing is going to get done, so I'd best be off and doing.
Posted by Cathy at 13:13