I’ve finished sewing together Northern Tree Line. I was so pleased with myself when I put it up on the wall and took a picture of it. Then I went right into cutting and piecing leftover large triangles for the backing. After supper, I sat down to start writing this blog post celebrating this top being finished and looked at the picture.......... 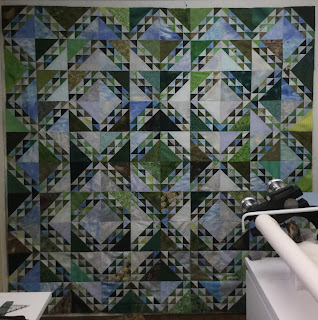 something’s wrong........ There are not one, not two, but three blocks turned the wrong way! Grrrrr....So instead of feeling great about the finish, I went into the having to rip stuff out doldrums. Thankfully it isn’t a difficult fix. With some selective ripping they can all be removed, turned the way they should be, and put back in. In fact, two of them have been ripped out and sewn back in place. The first one took two tries. I ripped it out, sewed it back in, looked at it, and realized I’d sewn it in wrong again, only wrong in a different way......... sigh......... This is the down side to having a design where each of the blocks is turned a different way in order to get secondary effects. I’ll finish the last of it tomorrow. Tonight, my brain is fried. So, I’m going to link this up to Lorna’s Let’s Bee Social and then find something fairly mindless to do.